Blake Shelton is head over boots in love with Gwen Stefani.

A source close to the newlywed couple tells PEOPLE in this week's cover story that the country star, 45, "wanted" their July 3 wedding on his Tishomingo, Oklahoma, ranch "to be perfect" for the No Doubt rocker, 51.

"His love for her is so deep," says the source. "Having the wedding at home was a way for their families — and Gwen — to be as comfortable as possible."

Despite the fanfare surrounding their long-awaited wedding, Stefani and Shelton were able to pull off an intimate celebration of their love. As 40 friends and family cheered them on and longtime friend Carson Daly officiated, Shelton — who dressed up his usual blue jeans with a tuxedo jacket, vest and bow tie — and Stefani said "I do" in a backyard chapel on his ranch.

"They purposely kept the wedding simple," says a source close to Stefani, who looked stunning in a custom silk and tulle Vera Wang wedding gown and chapel-length veil embroidered with Shelton and her sons' names. "They didn't want a circus. In the end, they just wanted to have this moment with their loved ones."

Over the years Oklahoma has become a respite for Stefani and her sons Kingston, 15, Zuma, 12, and Apollo, 7, from the hustle and bustle of their lives in Los Angeles, where she and Shelton moved into a new home earlier this year.

With so many happy memories at the ranch, the source close to the couple says, "they thought it was the perfect place for their wedding."

As the festivities rolled late into the night, Shelton and Stefani — who changed into a strapless Vera Wang minidress featuring hand-pieced silk and crystal-and-sequin embroidery — danced to a playlist by DJ Lucy Wrubel that featured hits by their famous pals, including Carrie Underwood, Luke Bryan, Kelly Clarkson and Maroon 5.

"They've been really excited leading up to the big day," says the source close to the couple. "Blake and Gwen were just so happy and looking forward to celebrating their relationship with their families."

Later in the night, a small group headed to Shelton's second home in the area, on the shore of Lake Texoma in Kingston, Oklahoma, to continue the celebrations. The night ended with an elaborate fireworks show.

"They already felt like husband and wife long before the wedding and have been operating as life partners," adds the source. "This day was a formality that was important to the whole family."

Stefani and Shelton's worlds changed forever when they met in 2014 while working together on the coaches' panel of The Voice's seventh season. They were both married at the time, and "there wasn't even much of a friendship that first season," Shelton told PEOPLE last February.

But as they leaned on each other during their respective divorces a year later, a friendship blossomed — followed by an unexpected romance. (Stefani announced her split from Bush frontman Gavin Rossdale in 2015 after 20 years together just weeks after Shelton and country singer Miranda Lambert finalized their divorce following four years of marriage.)

"Blake and Gwen met and fell in love during a time when they both were [going through difficulties]," says a music source. "They bonded during The Voice, and it grew from there."

As Stefani healed from her divorce, Shelton opened her heart again to the possibility of love. Their flirty friendship quickly grew into a serious romance, and both stars have said over the years they "saved" each other.

"Blake's caring, take-charge attitude worked wonders for her," a Stefani source says of the couple. "His compassion was great for her confidence, and the romance continued to develop. It's a true love story."

As the couple's love grew, so did Shelton's relationship with Stefani's three sons, whom she shares with Rossdale.

"Blake loves the kids and had no problem adjusting to a new role as an extra dad," says the music source. Adds another industry insider: "They each put the other first and appreciate each other. They are seamless as a family."

As they continue growing together as husband and wife, Shelton and Stefani have a jam-packed rest of the year. She has been hard at work on an upcoming solo album, and her new Las Vegas residency kicks off in the fall as her sons head back to school in L.A.

"She's able to lean on Blake to be an extra dad," says the source close to the couple. "He's a wonderful role model for Gwen's sons. The kids love him and have a really special bond with Blake."

Shelton will also be jetting across the country as he continues coaching on The Voice and traveling for his Friends and Heroes Tour starting in August.

"Gwen found someone she could relate to on many levels, and Blake is in awe of her accomplishments and drive," says the music source.

At the end of the day, friends say Shelton and Stefani have found kindred spirits in one another.

"They're both very trusting of each other and are very, very close," says the source close to the couple. "It's so hard to achieve that as celebrities in the spotlight, but they really have. They're going to have a wonderful future together."

For all the details on Blake Shelton and Gwen Stefani's dream wedding, pick up the latest issue of PEOPLE, on newsstands everywhere Friday. 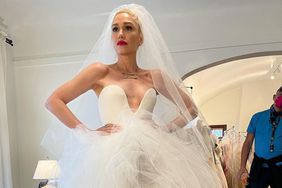