Nick Jonas has joined The Voice for season 18 alongside Kelly Clarkson, John Legend and Blake Shelton

Blake Shelton‘s got some tricks up his sleeve!

On Monday night’s premiere of The Voice, Shelton, 43, went all out in hopes of swaying a contestant away from choosing to be on new coach Nick Jonas‘ team by bringing an adorable puppy on stage.

“I feel like I’m at a disadvantage,” Shelton said after pressing the button for Tate Brusa right after Jonas, 27, did.

Within a few moments, a puppy was handed to Shelton and the audience cheered in excitement.

“What in God’s name?” coach John Legend said in shock. Kelly Clarkson then ran over, cooing over the pooch, saying, “I want the puppy!”

“This shouldn’t be allowed on The Voice!” Jonas hilariously fired back at Shelton.

“Tate, I want you to know that if you don’t choose me as your coach, this puppy is going to go straight back to the animal shelter,” Shelton revealed.

Shocked by the proposition, Brusa laughed hysterically and put his head down.

However, the puppy wasn’t a strong enough tactic to win Brusa over.

In the end, he chose to join team Jonas.

“WOW! That was unreal! TEAM NICK BABY!!!” Brusa wrote on Instagram alongside a photo of himself singing with Jonas on stage.

The pair sang a rendition of Ed Sheeran‘s “Perfect” as Jonas played the guitar.

While Shelton did his best to steer Brusa away from Jonas’ team, he is a fan of the “Jealous” crooner.

In a hilarious promo for season 18, Shelton was revealed to be a super-fan of Jonas.

The clip starts out with Shelton’s fellow coach Legend, 41, asking him if he has said “hi” to Jonas yet. In response, Shelton pretends not to know who he’s talking about and asks, “Nick, who?”

After Clarkson asks why Shelton is “being so weird,” it’s revealed that he has a room full of Jonas merchandise — including a guitar, a framed T-shirt, pillows with Jonas’ face on them and signs, which have phrases like “I am a Jonas Brother,” “Stay Calm & Dream of Nick Jonas” and “U had me at Nick Jonas” written on them.

As a life-sized cardboard cutout of Jonas falls on top of him, Shelton admits, “Okay, maybe I’ve heard of him.”

When Jonas walks up to the three coaches, Shelton is mesmerized as Jonas’ 2016 hit “Close” plays in his head. As he snaps back to reality, Shelton sheepishly says “hi” to Jonas.

Nick Jonas Set to Join The Voice as a Coach for Season 18: ‘Blake, I’m Going to Kick Your A—’

In October, Jonas first revealed that he would be joining The Voice as a coach during an appearance on The Ellen DeGeneres Show.

“I’m so excited to be a part of The Voice family,” Jonas said in a statement at the time. “It’s such an awesome group of individuals, and I can’t wait to help these artists really build and hone in to find their unique voices.” 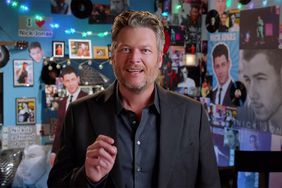