Billie Eilish on Why She Used to 'Sit in the Car and Cry' to 'Mr. Brightside' by The Killers

Billie Eilish and Finneas O'Connell are opening up about how The Killers have influenced them, both personally and professionally.

PEOPLE can share an exclusive clip of the siblings and musical partners performing "Therefore I Am" during the upcoming 2021 iHeartRadio ALTer EGO, as well as a conversation between Eilish, 19, and O'Connell, 23, about the Brandon Flowers-led rock band (which will also be a part of the event).

"The Killers is a band that I think we both sort of view as a childhood favorite — especially Hot Fuss, the album, because 'Mr. Brightside' on it is just such an important piece of music to us," Finneas says.

Adds Eilish of the "classic" 2003 track, "I mean, there was a lot of times when I would just sit in the car and cry to 'Mr. Brightside' even though nothing in my life, at all, was that situation."

"I love it. Love The Killers," raves the "Bad Guy" hitmaker.

Eilish and The Killers are among a dozen musical acts that will be featured during Thursday's ALTer EGO event, which was also include "iconic" performances from Coldplay, Muse, Weezer, The Black Keys and Beck.

Rounding out the lineup are Blink-182, Mumford & Sons, Twenty One Pilots, Cage the Elephant and the Foo Fighters, the latter of whom will kick off the show.

The Killers made headlines in November 2019 when Flowers, 39, brought 17-year-old Jayson Verebay on stage in Fort Lauderdale, Florida, after spotting the young fan holding up a sign asking to play with the band.

As the crowd erupted in cheers, the teenager took Ronnie Vannucci Jr.'s spot behind the drums to join in for The Killers' hit song "For Reasons Unknown."

The sweet moment, which was captured by Rolling Stone editor Tim Chan and shared to Twitter, saw the crowd go wild and chant Jason's name as he rocked out on stage with the famous band.

In an interview with Rolling Stone after his impressive performance, Jayson admitted that his "heart was pounding" and he "was actually shaking" when he ventured onto the stage. "It was the most mind-boggling experience ever," he added.

The 2021 iHeartRadio ALTer EGO airs Thursday at 9 p.m. ET/6 p.m. PT on LiveXLive.com and will broadcast across more than 80 Alternative and Rock iHeartRadio stations. 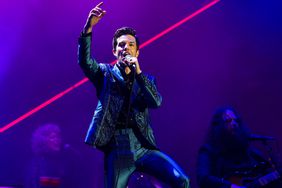