"If they're tryna party with the queen / They gon' have to sign a non-disclosure," the "Formation" singer raps on "Top Off"

Tiffany Haddish is taking rumors that Beyoncé shaded her on her new collaboration “Top Off” in stride.

On Friday, the Beyhive zeroed in on lyrics off of DJ Khaled‘s new song with the superstar, her husband JAY-Z and Future.

“If they’re tryna party with the queen / They gon’ have to sign a non-disclosure,” the “Formation” singer raps on the track.

Last month, the 38-year-old actress may have revealed too much when she went into detail on TV One’s UNCENSORED about the moment she saw Beyoncé, 36, warn away another woman during a party after JAY-Z’s concert.

After fans started tweeting that the singer shaded Haddish on “Top Off,” the comedian responded on Twitter with her usual humor — and also stuck up for Queen Bey.

“I love Beyonce … Everything she said rang so real to me. Just know I will sign A NDA any day For Beyoncé,” she wrote in a Tweet. “But also know this I will fight for Beyoncé. I Love that woman she is a Gift from God.”

Haddish previously said another actress “touched JAY-Z’s chest” at a bash, and “Beyoncé came walking up like… ‘Biitttchhh!’ But, she didn’t say that. But her demeanor, her body from the way she walked up on them said ‘Get your hands off my man’s chest.'”

Though she didn’t name the “other actress,” Haddish added that “Some other stuff happened but I’m not gonna say nothin’ yet.” 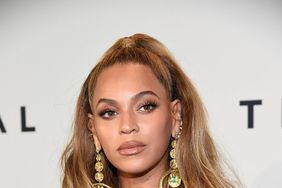 'I Break the Internet': See Why Fans Think Beyoncé Is Shading the Kardashians on Her New Song