The singer's daughter Blue Ivy Carter even has a writing credit!

Beyonce dropped The Lion King: The Gift, an album accompanying the anticipated reboot of the beloved 1994 Disney classic on Friday.The album — which is separate from the movie’s official soundtrack — features Kendrick Lamar, Pharrell Williams and Wiz Kid, as well as her husband JAY-Z.

Making the release a real family affair, the singer and rapper’s 7-year-old daughter Blue Ivy even has a writing credit on the song “Brown Skin Girl.”

Beyoncé’s costar Donald Glover, who plays Simba in the film, also appears on the album as his musical alter ego, Childish Gambino. The song, “Mood 4 Eva,’ also features JAY-Z and is available as an extended track on TIDAL.

The Gift showcases Beyoncé’s iconic voice on musical tracks that are interspersed with “interludes” from characters from the movie, including Mufasa, Nala, Simba, Scar, Timon and Pumbaa.

Fans who can’t wait to hear the new renditions of songs from the original, like “Can You Feel the Love Tonight” and “I Just Can’t Wait to Be King” can hear those on the movie’s official soundtrack.

Calling the album “a love letter to Africa,” the mother of three, 37, told ABC News, “I wanted to make sure we found the best talent from Africa, and not just use some of the sounds and did my interpretation of it. I wanted it to be authentic to what is beautiful about the music in Africa.”

The release of The Gift comes days after she premiered the music video of the first single “Spirit,” which is also featured in the film.

The full cast of the photorealistic animation was revealed back in 2017 — Queen B voice’s Nala opposite Glover as Simba. Chiwetel Ejiofor plays the villainous Scar and Alfre Woodard brings Simba’s mom Sarabi to life. James Earl Jones also returns as Simba’s father, Mufasa (who he voiced in the original 1994 animated movie).

This marks the follow-up to Beyoncé’s other surprise album: Homecoming, the live version of her historic 2018 Coachella performance. It’s also one of the only promotional projects the notoriously private pop star has done ahead of The Lion King‘s release.

On June 1, Beyoncé got into character at the Wearable Art Gala (an event she usually attends, as it’s hosted by her mom, Tina Knowles Lawson). This year’s theme was “A Journey to the Pride Lands”, and the star showed up in a full Nala-inspired look.

What It’s Like to Work with Beyoncé: Disney’s The Lion King Cast Tells All!

In a series of photos posted to her Instagram, the “Lemonade” singer looked flawless in a jumpsuit ensemble with a lion’s mane attachment and a long gold train.

The post also included a rare video of Blue Ivy singing along to “The Circle of Life” from the original Lion King. 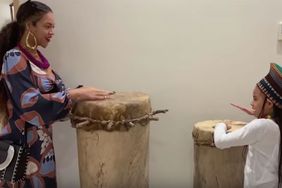 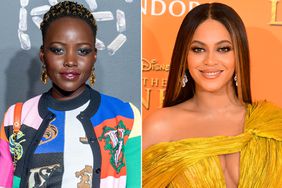