The Backstreet Boys Form a Barbershop Quartet with Jimmy Fallon — and Sing the 'Thong Song'!

The Backstreet Boys and Jimmy Fallon surprised late-night television viewers with a hilarious rendition of Sisqo’s 1999 hit “Thong Song” this week — with a twist.

On Tuesday night, the iconic boy band joined the host on The Tonight Show there they formed a barbershop quartet and sang the notorious song in quartet fashion — pitch-pipe and all.

The group was even clad in some iconic quartet outfits, complete with colorfully striped jackets worn over white pants, red bow ties and matching boater hats.

Ahead of their performance with Fallon, the boy band — comprised of A.J. McLean, Howie Dorough, Nick Carter, Kevin Richardson and Brian Littrell — shared a selfie on Twitter, calling themselves “The Ragtime Gals.”

“Don’t miss The Ragtime Gals on @FallonTonight! Show starts in an hour!” they shared with a winky-face emoji.

During their appearance on the show, the group also set the record straight on some popular Backstreet Boys myths that Fallon found circulating on the internet, including one about Ryan Gosling almost being a part of the band.

“We were playing basketball almost every other day. The group had started. I kept telling him how big this was gonna be, and he’s like, ‘Dude, New Kids [on the Block] already did it this is never gonna work, just shoot the ball,’ ” he recalled as his bandmates laughed.

“Cut to [present day], he was wrong. And it did work,” McLean added. “And he’s such an amazingly talented singer, performer, actor and I just wish we could be in the same room and have this question asked. Just squash it.”

Another hot-topic myth Fallon asked the group about was if the Backstreet Boys and ‘NSYNC rivalry is “actually real.”

“Alright, I gotta be honest. I know you’re friends with Justin [Timberlake],” Carter said to Fallon. “It’s worse than it’s ever been before. We can’t even be in the same room with these guys.”

“No, I’m totally playing,” he quickly added while laughing. “We love them. They’re great guys. I mean the only time that I can really remember there being like a rivalry is maybe late ’90s early 2000s. One thing that actually stands out to me is we had an opportunity to perform at the Super Bowl and we were getting ready to do out Black and Blue Tour and we got offered to either do the halftime show or the national anthem.”

“We chose the national anthem, and then they did Britney [Spears] and ‘NSYNC and they performed at the halftime,” he continued. “I look back at it and it’s kind of one of those bucket list things where we regret it a little bit.”

The Backstreet Boys are currently gearing up for their DNA World Tour, running from Feb. 20 through Oct. 9. 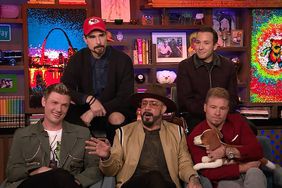