"I ask all of you for your prayers during this time and that my music can live on with you," the Grammy-winner said in a statement

B.J. Thomas has been diagnosed with stage 4 lung cancer.

The Grammy-winner, 78, revealed his diagnosis in a statement released on Tuesday.

"I just wanted to take this unique opportunity to share my gratitude to Gloria, my wonderful wife and my rock for over 53 years, my family, friends, and fans," the "Hooked on a Feeling" singer said.

"I'm so blessed to have had the opportunity to record and perform beautiful songs in pop, country, and gospel music, and to share those wonderful songs and memories around the world with millions of you."

"I ask all of you for your prayers during this time and that my music can live on with you," added the star.

With upcoming tour dates beginning April 17 in Everett, Washington, thehitmaker remains optimistic that he will be able to perform as planned.

Over the course of his decades-long career, the genre-bending icon has won five Grammy Awards, including three consecutive wins in the best inspirational performance category for his hit songs "Home Where I Belong," "Happy Man" and "You Gave Me Love (When Nobody Gave Me A Prayer)" in 1978, 1979 and 1980 respectively.

RELATED: Criscilla Anderson Enters a New Chapter in Her Fight with Stage 4 Colon Cancer - 'It's Always a Roller Coaster'

His 1969 smash record "Raindrops Keep Fallin' on My Head" was inducted into the Grammy Hall of Fame in 2014.

Thomas has sold more than 70 million albums worldwide and released eight Billboard No. 1 hit songs — he is behind 26 Top 10 singles on the Hot 100 chart. The legendary musician has been named one of Billboard's Top 50 Most Played Artists.

Thomas shares daughters Paige, Nora and Erin with his wife Gloria, whom he wed on Dec. 9, 1968. The pair are also grandparents. 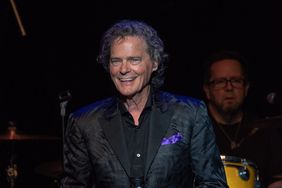 B.J. Thomas, 'Hooked on a Feeling' Singer, Dead at 78 from Lung Cancer