Art Neville founded three bands over the course of his decades-long career, including the Neville Brothers, the Meters and the funky METERS

Art Neville died on Monday. He was 81.

The music legend — who earned the nickname of “Poppa Funk” for co-founding New Orleans-based bands the Neville Brothers, the Meters and the funky METERS — “passed away peacefully this morning at home with his wife, Lorraine, by his side,” his longtime manager, Kent Sorrell, told PEOPLE in a statement.

Neville’s cause of death was not immediately available.

Over the course of his more than 50-year career, Neville earned three Grammy Awards, including the organization’s Lifetime Achievement Award in 2018. He also received the NAACP Image Award in 2006.

Neville was born in New Orleans in 1935 and immersed himself in music at a young age. While working at a record store, he absorbed all he could from the great doo-wop singers of the day including Clyde McPhatter’s Drifters, the Orioles and the Clovers, as well as local piano rockers Professor Longhair and Fats Domino.

RELATED GALLERY: Remembering the Stars We Lost in 2019

In 1953, Neville joined the Hawketts, with whom he recorded the classic “Mardi Gras Mambo” in 1954. Then in the early 1960s, Neville formed the Neville Sounds, which later became the Meters in 1965.

Known for their songs “Cissy Strut,” “Sophisticated Cissy” and “Look-Ka Py Py,” the Meters — which included Neville, Porter Jr., Leo Nocentelli and Zigaboo Modeliste — opened for the Rolling Stones on their Tour of the Americas in 1975.

The Meters continued to tour and record until 1977, when Neville, his three brothers — Aaron, Charles and Cyril — and their reverend uncle, George Landry, came together to work on an album entitled Wild Tchoupitoulas. From there, the Neville Brothers were formed and went on to record and tour over the next 30 years.

In 1994, Neville formed his last band, the funky METERS.

Neville is survived by his wife, Lorraine, and his three children: son Ian and daughters Amelia and Arthel. 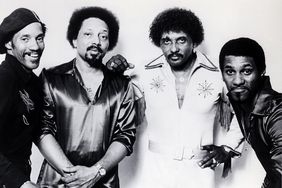 Your Guide to the Nevilles, New Orleans's First Family of Music

Picks and Pans Review: Treacherous: a History of the Neville Brothers, 1955-1985