He Kissed a Girl and He Liked It! Katy Perry Surprises 19-Year-Old 'American Idol' Contestant with His First Smooch

As Glaze went in for a chaste kiss on the cheek, Perry turned her head at the last second and landed a kiss on the lips

He kissed a girl and he liked it!

During his audition, Glaze, an electronic store cashier, admitted to Perry and fellow judges Luke Bryan and Lionel Richie that he hasn’t locked lips with anyone before.

As Glaze went in for a chaste kiss on the cheek, Perry turned her head at the last second and landed a kiss on the lips!

After the kiss — which caused the 19-year-old to fall to his knees — Glaze sang his heart out during his audition, but unfortunately didn’t convince the judges to send him to Hollywood.

“I really enjoyed meeting you today,” said Perry. “You gave my heart a flutter. I think you’re really sweet but truthfully, there are just some people that are outsinging you right now and so I don’t think it’d be fair to put you in that kind of competition. Next time just take your time. I think you were a bit rushed and I think that’s because I sped up your BPM of the heartbeat.”

Though he didn’t land a golden ticket to Hollywood, it’s safe to say it was a memorable day for Glaze.

“It was an eye-opening experience,” he said. “I very much learned I am a terrible kisser!”

But it’s all about honesty, according to Perry.

“It’s very constructive criticism,” Perry, 33, recently told PEOPLE of their judging styles. “Personally, I’m a straight shooter. I’m very cut and dry sometimes. You know it seems a little not soft — I do try and watch myself because I do know how it feels to be in their shoes. I was in their shoes 10 years ago. I remind myself and I’m reminded and I’m inspired by all of their stories. I know it wasn’t an overnight success for me; it’s not going to be for them. They still have a long way to go. We’re really real with them.”

“We really encourage them,” she added. “There’s no dismissing and just sending off and saying, ‘You suck.’ That’s not how we roll. I think in the past there was some of that and maybe taking advantage of people; their actual skill sets for comedy. We don’t do that anymore but we still laugh just as much.”

American Idol airs on Sundays at 8 p.m. EST on ABC. 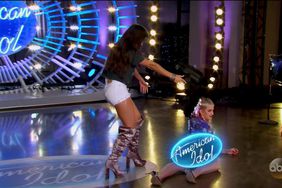 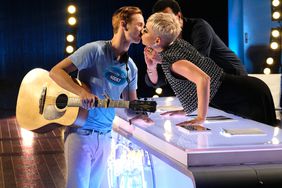