Inside Drake's Star-Studded AMAs After-Party: All of the Details

If anyone can throw the ultimate celeb-filled bash, it's the "6 God"

If anyone can throw the ultimate star-studded after-party, it’s Drake.

The “Hotline Bling” rapper hosted the party at Delilah in West Hollywood, wearing a tan sweater and green pants with red tinted glasses. Naturally, the 30-year-old took to Instagram to pose for shots with his father, Dennis Graham.

Both he and his father donned pensive expressions as they stood side by side in the picture. Drake simply captioned the post, “More.”

Mendes also took a shot with the party host, uploading the photo to Instagram with the caption “True legend !”

Drake’s former Degrassi co-star Nina Dobrev also attended the bash, where she hung out with G-Eazy in a roped-off section of the restaurant. Dobrev praised Drake in an Instagram post earlier in the evening, uploading a photo of the two embracing on stage with the caption: “Congratulations to this [champagne] popping badass. Love you buddy #DegrassiForever.”

Drake wasn’t the only winner at the party. Ty Dolla $ign, who won the collaboration of the year award alongside Fifth Harmony, took to the shindig where he appeared cozy with Ally Brooke.

The singer gushed about the win in an Instagram photo of himself with the women, writing, “God is great! I’m thankful af! Fans so raw! This is so f—– awesome!”

Jenner was spotted cuddling up to rumored boyfriend Jordan Clarkson, who took Tequila shots with her elder sister Kardashian.

The Weeknd made a fashionably late entrance to the party, showing up just before 2 a.m. with his crew through the kitchen to avoid the paparazzi. He shared a few laughs with Drake and the rapper’s father as he stayed in the restaurant’s roped off section.

Fresh off of his solo AMAs performance, former One Direction member Niall Horan seemed in high spirits as he chilled at a table with a group of friends at the bash.

He posed for a group photo, uploading the shot to Instagram with the caption, “Lovely people!” And Mendes uploaded a video clip of him and Horan singing Mendes’ song “Mercy.” 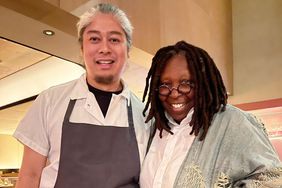 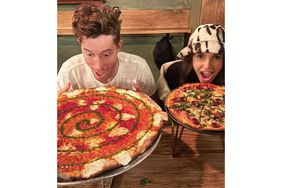