"I am saddened by my family and what they have done to me," Aaron Carter said. "Your lives have broken my heart."

According to court documents obtained by Entertainment Tonight, the order protecting Angel, 31, from her brother — which was originally issued in September — has now been extended until November 19, 2020.

The “Aaron’s Party” singer, 31, will not be able to come within 100 yards of Angel and her husband Corey Conrad, as well as their place of business and their home, ET reported. He’s not to “harass or threaten them in any way, including on social media.”

PEOPLE was unable to immediately obtain the documents.

Angel previously claimed in filed court documents that Aaron had “threatened the lives” of her, Conrad, and their daughter Harper during a phone call on Sept. 5, E! News reported. Aaron allegedly told her, “I have people that would come and harm you.”

Per the new ruling, Aaron will also be unable to possess firearms for another year, ET reported. He had originally been asked to surrender any weapons in his possession on Sept. 20, when the the temporary order went into effect.

He was told by a judge in court that he is too dangerous to own any firearms, TMZ reported. He allegedly responded to that ruling with screams of anger, saying that he would go out of state and buy more guns.

He first obtained an order against Aaron back in September, after claiming in filed court documents that his brother threatened to kill his “pregnant wife and unborn child.”

Nick revealed the news on Twitter, writing that he and Angel made the decision due to Aaron’s “increasingly alarming behavior and his recent confession that he harbors thoughts and intentions of killing my pregnant wife and unborn child.”

“We were left with no choice, but to take every measure possible to protect ourselves and our family,” the Backstreeet Boys singer wrote.

At the time, Aaron responded on social media saying that he was “astounded at the accusations being made” and stressing, “I do not wish harm to anyone, especially my family.”

“All I ask is for my family to leave me alone,” Aaron wrote. “This is blood. Not love. I will never be around you and I don’t want to be around you.”

Aaron doubled down on those claims on social media on Tuesday, as he reacted to the latest court decision.

“I am devastated by what happened in court today,” he wrote on his Instagram Story. “My sister lied over and over in an effort to take away my 2nd Amendment rights and she did it on behalf of my brother [Nick] to silence me talking about how he raped and sexually assaulted multiple women.”

“I will abide by the judge’s order, but I will not stop speaking on behalf of victims such as Melissa Schuman,” Aaron continued — referencing the former Dream singer who accused Nick in November 2017 of sexually assaulting her back in the early 2000s (Nick denied her allegations and, in September 2018, the Los Angeles District Attorney’s office declined her case due to the 10-year limitation period expiring).

Added Aaron: “I am saddened by my family and what they have done to me. Your lies have broken my heart.”

When previously reached by PEOPLE regarding Aaron’s allegations, a representative for Nick had no additional comment.

Aaron has had a history of addiction struggles and drug use, and says he has been diagnosed with multiple personality disorder, schizophrenia and acute anxiety.

The Carter’s other sister Leslie died from an overdose in 2012. 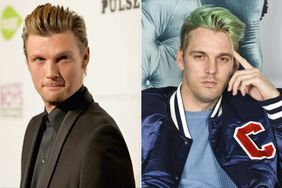