During the show in Brooklyn on Sunday, Normani, 25, performed her hit "Wild Side" solo as collaborator Cardi B cheered her on from home with her newborn baby boy.

Normani began her performance wearing a metallic outfit as she was pulled across the stage and joined her dancers for a sultry dance routine before asking the Barclays Center crowd, "VMAs, how y'all feelin'?"

Then, Teyana Taylor — who was tied to a cross — joined her onstage, and Normani gave the singer-dancer a standing lap dance.

Because Cardi was not onstage with her, the Fifth Harmony alum performed an additional verse, which was featured on the "Extended Version" of "Wild Side."

"i don't know where to start with you guys. you're my heart and soul and have always stuck by me through all the f—ing adversities. first shall be the last and the last shall be the first," she tweeted after being added to the lineup. "MY NATION i love youuuuu. s— bout to be lit IM CRINE."

The performance marked Normani's first since she took the stage in 2019 to perform her debut single "Motivation." That year, the singer, 25, won a Moon Person for her "Waves" music video featuring 6lack.

In a conversation with Apple Music's Ebro Darden last month, Normani said that Cardi was "such a trouper" filming the music video for "Wild Side" while pregnant.

"She didn't complain one bit," Normani said. "Like, she is one of the most genuine spirits I ever had the pressure of meeting, and I wish the world could experience her the way that I have been fortunate enough to. She was very very encouraging throughout the whole process … just reminding me of who I am … and sometimes I lose sight of that."

"Wild Side" was released as the lead single off of Normani's upcoming debut solo album, which she told Darden she hopes shows fans another "layer" of her.

"I'm a Black female who can do the pop s—, but I can also be on a record with Cardi, and I could do features with 6LACK," she said. "I'm all of those things. I feel like people are so quick to put me in a box and create barriers, but I've always been expressive of the fact that I want to be genre-less, I can do it all."

Last month, Normani opened up to Allure about how she's felt like the "underdog in anything that I've ever done," including during her time in the girl group Fifth Harmony.

"I felt like I was overlooked," she said. "That idea has been projected on me. Like, this is your place."

As a soloist, Normani — who went on hiatus with Fifth Harmony in 2018 — said she's gotten to a point in her career where she feels stronger in her artistry.

"I'm reinventing myself," she said. "Now you all are finally going to be able to see me tap into that awareness — that I know I'm the s—." 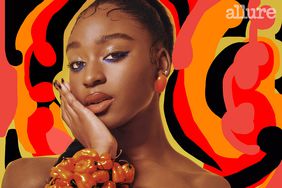