Grab the tissues, High School Musical fans, because this one will hit you right where it hurts.

During a promo tour for Efron’s new film We Are Your Friends, the former Disney star was asked – along with his director Max Joseph and costar Emily Ratajkowski – to identify songs based on their intros.

The group started off strong when Ratajkowski recognized Beyoncé’s “Drunk in Love” within seconds, and Justice vs. Simian’s “We Are Your Friends” was an obvious giveaway.

But just when you thought the game couldn’t get easier as “Breaking Free” started playing, Efron stumbled.

It took him a staggering 22 seconds – and basically guessing every word of the song as the title – to finally get it right.

He then tried to make up for the mishap by throwing in another HSM pun to assure everyone he does, in fact, remember some songs from the movies.

“Clearly our head’s in the game,” he joked.

But don’t be too miffed: The group also failed to identify One Direction’s “Steal My Girl” – though Efron did admit he liked what he heard from it. 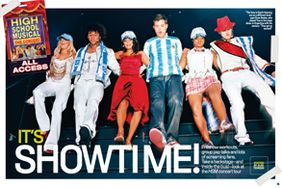