The British actor, who plays a brooding vampire, receives a rather explicit request

Pattinson also revealed that he put off auditioning for the high-profile role for five months because the script described the character, created by novelist Stephanie Meyer, as “the ideal, perfect man.”

“I felt like an idiot being like, “Hi, I’m here for the ideal man audition,” he said.

He eventually landed the role – one that required he develop a six-pack – and now he has tweens shrieking at the sight of him during appearances for the vampire movie.

“It’s pretty nuts,” he says. “It doesn’t seem very real at all. I just go to these different cities and people start screaming.” 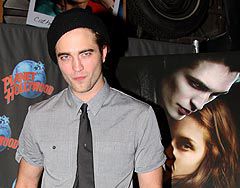 'Twilight' Star Robert Pattinson Gets 'Carried Away' While Kissing 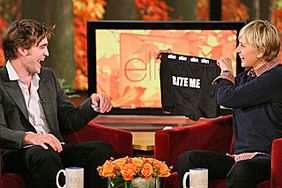