Winona Ryder Defends Ex Johnny Depp: He Was 'Never Abusive at All Towards Me'

Johnny Depp‘s ex-girlfriend Winona Ryder is coming to the star’s defense amid allegations that he physically abused Amber Heard throughout their relationship.

Ryder, 44, said Depp, 53, was “never abusive at all” during their four-year relationship.

“I can only speak from my own experience, which was wildly different than what is being said,” Ryder told Time. “He was never, never that way towards me. Never abusive at all towards me. I only know him as a really good, loving, caring guy who is very, very protective of the people that he loves.”

Depp and Ryder famously began dating after meeting at a film premiere in 1990. Five months after their first date, the couple got engaged. During their relationship, the actor got “Winona Forever” tattooed on his right arm, which was later altered to “Wino Forever” following their split.

While Ryder acknowledged that their relationship was “a long time ago,” she said she’s never seen the actor act out violently.

“I wasn’t there. I don’t know what happened. I’m not calling anyone a liar. I’m just saying, it’s difficult and upsetting for me to wrap my head around it. Look, it was a long time ago, but we were together for four years, and it was a big relationship for me,” she said. “Imagine if someone you dated when you were – I was 17 when I met him – was accused of that. It’s just shocking. I have never seen him be violent toward a person before.”

“It’s just hard to picture. The only word I can come up with is unimaginable. You know with certain people you hear something and go, ‘I can see that.’ But this isn’t that,” she continued. “I can only offer my own experience. It’s such a serious, horrible thing to be accused of.”

Heard was granted a temporary restraining order against Depp in May, claiming the actor was both physically and verbally abusive throughout the “entirety” of their relationship. 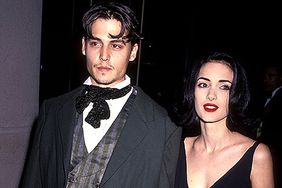 Johnny Depp and Winona Ryder: A Look Back at Their Glamorous, Tempestuous Romance