On Wednesday, the actor posted a mesmerizing video of himself jumping rope, but instead of placing the camera straight-on, Smith wanted to show the perspective from the rope's point of view.

While most of his followers teased that the clip made them dizzy, one user used the opportunity to make a witty remark in relation to Smith's recent relationship reveal.

"Ok don't get entangled 🤣," the user joked, referencing Pinkett Smith's relationship with Alsina during her split from Smith.

While Smith applauded the user for his creativity, he did not condone the comment.

Earlier this month, the couple revealed on Facebook Watch's Red Table Talk that they had briefly separated about four years ago, and during that time, Pinkett Smith, 48, found herself in "a different kind of entanglement" with Alsina.

With some prodding from her husband, the actress said, "Yes, it was a relationship, absolutely."

The term "entanglement" became Twitter's word of the month following the show with Pinkett Smith and the Independence Day star. The episode set the record for the most views in 24 hours for a Facebook Watch original episode, with more than 15 million views reported in less than a day.

The pair eventually found their way back together after rediscovering what made them feel happy as individuals.

"Through that particular journey, I learned so much about myself and was able to really confront a lot of emotional immaturities, emotional insecurity and I was really able to do some really deep healing," Pinkett Smith said on her Facebook Watch show.

"And as I came through and started to realize certain things about you and I, he decided to break all communication with me which was totally understandable. And I let that be and hadn't talked to him since so it is a little weird that all this stuff is coming out now since this was several [years ago]," she continued.

"We refer to ourselves as life partners . . . you realize you are literally with somebody for the rest of your life,” said Smith, quipping that marriage "ain’t for the weak of heart."

Chris Rock Says Will Smith Oscars Slap 'Hurt' but He 'Shook' It Off: 'I'm Not a Victim' 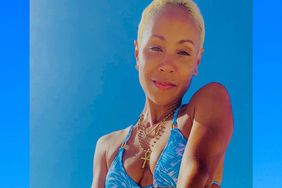