Whoopi Goldberg Took Her Fellow Oscar Nominees to Dinner After Winning: 'We All Did Really Good Work'

After winning her Oscar in 1991, Whoopi Goldberg celebrated her special night by honoring her fellow nominees.

The View co-host is on the cover of Variety where she reflected on her Best Supporting Actress Oscar win for her 1990 film Ghost, which co-starred Patrick Swayze and Demi Moore.

While she doesn't remember her post-show celebration, she did tell Variety she took out her fellow nominees to dinner after the show and had chocolate Oscar statuettes made for them.

"We all did really good work," Goldberg said. "Any one of us could've taken it, and I don't think anybody would've been mad at anybody else."

She added, "Sometimes you look at actors and you know, 'Oh, he's mad,' but with us, it was just 'Whoever wins is paying, that's all I know. Free food.'"

With the 2021 Oscars just days away, Goldberg reflected on the achievement she is most proud of — and it's not starring in a movie. 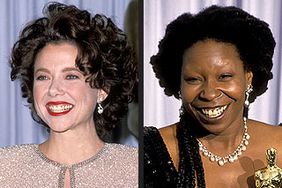