Meryl Streep Makes a Cocktail and Sings in a Bathrobe with Christine Baranski, Audra McDonald

Meryl Streep, Christine Baranski and Audra McDonald instantly won quarantine by singing and drinking in their bathrobes in honor of Stephen Sondheim

And on the second month of social distancing, Meryl Streep logged on to Zoom and sang in a bathrobe.

The legendary actress and three-time Oscar winner made an appearance during the special celebration of Stephen Sondheim's 90th birthday on Sunday, where A-List celebs from stage and screen gathered virtually to sing some of the lyricist's greatest hits.

Streep was joined by Emmy and two-time Tony winner Christine Baranski and six-time Tony winner Audra McDonald to sing the iconic song "Ladies Who Lunch" from the musical Company. The song features each of them getting drunker and drunker while toasting different kinds of women who seem to have it together.

Meryl Streep Ordered Wendy's to the Set While Shooting Little Women: 'I Was Saving Money'

Streep, Baranski and McDonald lived up to the hype, each wearing white bathrobes and swinging their way through cocktails and glasses of wine.

Baranski, 67, got the performance started, at around the 2-hour mark in the video above, by pouring herself a hefty glass, while Streep, 70, chimed in while shaking a cocktail and comically pouring it into a martini glass over her head.

McDonald, 49, later comes in with a bottle of liquor, while Streep joins her by pretending to pour some scotch in a glass before taking a drink from the bottle itself instead.

The song ends with all three toasting to Sondheim's birthday.

The three women have sang Sondheim's lyrics before, with Streep memorably starring in the movie musical adaptation of Into the Woods. 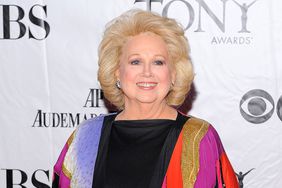