The famed author is announcing an undisclosed project on May 4

Calling all Twihards — Stephenie Meyer could be releasing another novel as part of her highly popular teenage vampire franchise.

The critically acclaimed author sent fans into a frenzy this week after posting a countdown to an undisclosed project on her website, leaving many to wonder if she could be dropping another sequel in the Twilight saga.

The countdown — which will terminate on Monday, May 4 — was also posted on the social media pages of Fickle Fish Films, a production company co-founded by Meyer, 46.

The company has been tweeting out the daily countdown, beginning with "5 days" on April 29.

Stephenie Meyer Says New Twilight Novel Is Just Bonus Material: 'This Is Not a Real Book, and I Am Totally Aware'

According to E! News, Meyer was originally set to publish the book in 2008 but put plans on hold after a copy of her manuscript was leaked. The author later posted a partial rough draft of the novel, which is still available on her website.

Midnight Sun tells the teenage love story from the point of Edward Cullen instead of Bella Swan.

Some fans theorized that Meyer's countdown could be pointing to a sequel of her 2008 novel The Host, which was later turned into a movie in 2013, or the release of another novel related to her 2016 book The Chemist.

Twilight Turns 11! See What Kristen Stewart, Robert Pattinson and the Cast Are Up to Now

According to CNN, the Twilight books sold more than 100 million copies worldwide and were later turned into a series of five movies.

The first film, Twilight was released in 2008 and was an instant hit, thanks in large part to the rabid fans of Meyer's highly popular books. Last year, the movie celebrated its eleventh anniversary.

The film was directed by Catherine Hardwicke (Lords of Dogtown, Thirteen) who told PEOPLE that stars Kristen Stewart and Robert Pattinson had "electricity" between them when they auditioned together.

Twilight grossed more than $393 million worldwide and blossomed into a fan-loved franchise. 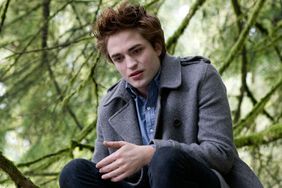