Tom Hiddleston Returns as Loki (Smarmy Wig and All) on Set of 'Thor: Ragnarok' with Chris Hemsworth

Chris Hemsworth and Tom Hiddleston were spotted on the Brisbane, Australia, set of the third solo Thor film

Loki’s locks are back.

Tom Hiddleston has once again slipped into character as Thor and The Avengers‘ scheming nemesis, showing up with costar Chris Hemsworth on the set on Thor: Ragnarok in Brisbane, Australia, as he sported the God of Mischief’s trademark long, oily ‘do.

Hiddleston, 35, donned the wig – and a sleek black ensemble – as he literally suited up for the role on Monday for the shoot.

Hemsworth later took to social media, posting an Instagram snap of the two of them mugging it up on set.

“Thank you Brisbane for letting us disrupt the traffic and shoot a piece for our little film #thorragnarok in your beautiful city!!!” he wrote on Instagram.

Hiddleston, who jetted to Rhode Island earlier this month for a quiet weekend with girlfriend Taylor Swift before hightailing it to Australia, later posted a then-and-now shot of him and Hemsworth, looking back at their work on the first Thor film, which was released in 2011.

Hiddleston had previously teased his return as Loki: The Instagram newbie made his debut on the photo-sharing site a week ago with a selfie in full Loki regalia, and simply captioned the shot “He’s back!” 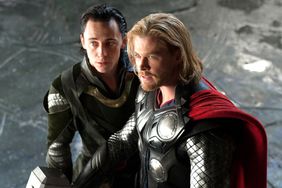 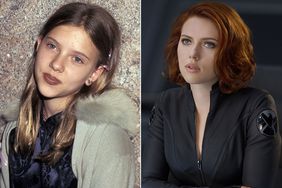 See The Avengers Before They Were Superheroes!