Tom Cruise Says He's Wanted to Be an Actor Since Age 4: 'I Would Write Skits for My Family'

Tom Cruise was destined to be a movie star.

The Mission: Impossible star, 55, revealed he’s never considered another career path on Wednesday, while accepting the Pioneer of the Year award by the Will Rogers Motion Picture Pioneers Foundation. The event took place during the third day of Cinemacon, the National Association of Theater Owners’ annual convention in Las Vegas

“I grew up going to movies. It was really my life, my escape. It was really my world. I wanted to dream and I wanted to make movies since I was 4 years old, no lie,” he said onstage. “I remember thinking I just want to do movies. I would write skits for my family. I love what I do and that started in these theaters. It’s been and is such a privilege.”

While guests ate their dinners, songs from Cruise’s films played overhead as messages of congratulations showed on big screens.

“To work with someone who knows all the things Tom knows and brings to the set every day, it’s intoxicating,” Alec Baldwin said in a video reel.

Dakota Fanning also recorded a congratulatory clip, thanking Cruise for influencing her career. The two starred together in the 2005 film War of the Worlds.

With reporting by Mark Gray. 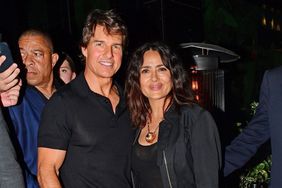