"There's still a through-line and an integrity that two white men just can't do," Taylour Paige said of the original Zola script

Taylour Paige delivers a breakout performance in the new film Zola — but the actress, 30, wasn't immediately in love with the project.

"The energy just didn't feel adapted right," Paige told ET Online of reading the original script by Andrew Neel and Mike Roberts, inspired by the viral 148-tweet thread by Aziah "Zola" King about the wild road trip that led to her falling out with a fellow stripper. "It felt like, 'We're just going to make a movie and make some money off of something and make some s--- up.'"

"It felt like some s---- that we've seen before. With all due respect, it's no shade to those two people that wrote it," Paige continued of the first iteration of the script she read. "I just was like, 'This doesn't feel like A) the story I want to tell, and B) this doesn't remind me of the feeling I felt when I read her writing.' Like the little, little nuances of like, 'So, I go down to the pool. I mean, I am in Florida.' Like, there's still a through-line and an integrity that two white men just can't do. Sorry! It was completely different, and it also just felt, like, exploitive."

Reps for Neel and Roberts did not immediately respond to PEOPLE's request for comment.

"I think that there's a million different versions of this story. And in the wrong hands, it could have easily ended up as something we've seen before and lots of boobs and --" said Paige's costar Riley Keough, before Paige chimed in: "It was that, though."

The project, which was to be directed by James Franco, later found a home with writer/director Janicza Bravo and cowriter Jeremy O. Harris (Slave Play). "And that's why it's so special, is because of Janicza and Jeremy and Joi [McMillon, the editor] and all of their incredible minds," Keough, 32, added.

Paige previously described the original script as "inherently racist and sexist," as she detailed the process of getting the titular part. "I did a tape for it," she said to ET Online. "And I am a big believer in rejection is protection because I read the script and I have to be honest, I wasn't as inspired by it, but it did trigger me to ask my agent, 'Hey, whatever happened to that Zola script?'"

"She was like, 'Actually, they got a new director and writer,'" Paige continued. "And I was like, 'That would have been interesting information!' Because the original script I read, it was inherently racist and sexist. Like, very much they took the tweets and just made up some B.S. So, by the time I got the new script, it was Janicza [Bravo] and Jeremy O. Harris, and they're just geniuses, so yeah."

Watch Paige and Keough bring a wild true story to life in Zola, which opens in theaters June 30. 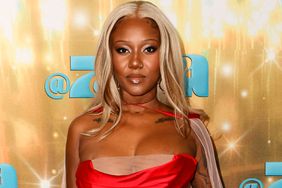 Real-Life 'Zola' Aziah King Calls Out A24 for Awards Show Snub: 'No One Thought to Invite Me' 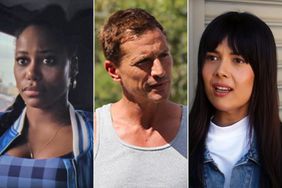 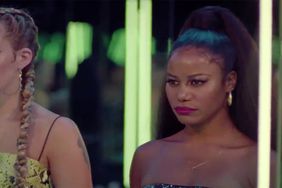