The Real-Life Love, Courage and Heartbreak Behind 'Stronger' : How Boston Bombing Survivor Became a Hero

The true story of Jeff Bauman, the Boston Marathon survivor who regained strength after losing both legs

Bauman was waiting for his girlfriend Erin Hurley at the finish line of the 2013 Boston Marathon when terrorist bombs exploded nearby, killing three people and wounding nearly 250.

Bauman, 33, who lost both legs because of the attack, became a symbol of the day’s horror and heroism in a photo that showed Carlos Arredondo, Devin Wang and EMT Paul Mitchell racing to get him medical attention.

What followed was a long and difficult road to recovery — a journey depicted in the critically acclaimed film Stronger, starring Jake Gyllenhaal, which opens Friday, Sept. 22.

“You better win,” were Bauman’s parting words to Hurley as he dropped her off at the race on April 15, 2013, according to the New York Times.

A few hours into the race, Bauman, then 27, was waiting near the finish line with two of Hurley’s roommates when a strange man caught his eye.

The man was wearing a dark coat, sunglasses, a baseball cap pulled tightly over his head and was carrying a backpack. His outfit stuck out, especially considering the warm temperature outside — but it was his demeanor that really got Bauman’s attention. While the rest of the crowd was cheering, the stranger had a serious look on his face.

When Bauman looked back again, the man was gone, but his backpack had been left on the street.

Then Bauman saw a flash and heard a loud bang. Next thing he knew, he was lying on the sidewalk, confused and smelling sulfur in the air. At first, he thought it might have been a firework gone wrong, he told the NYT.

But after sitting up, he saw the bodies and blood that surrounded him. He spotted one of Hurley’s roommates a few feet away (she survived but lost part of her leg in the explosion). It wasn’t until he saw the horrified look on her face as she looked down at him that he realized that both of his legs were missing.

After lying back down on the street in pure terror, emergency room physician Allan Panter began tending to him. Panter pulled him out of the crowd and tied a makeshift tourniquet around his right leg, before leaving to help others.

Next, a man in a cowboy hat named Carlos Arredondo rushed to his side, lifted him into a wheelchair, and pushed him towards a medical tent and into an ambulance.

Bauman was rushed into emergency surgery where he had both his legs amputated at the knee.

The following day, he underwent a second operation to drain internal fluids formed by the blunt trauma of the attack. He also lost significant hearing in both ears from the blast.

But despite dealing with both the mental and physical pain of both legs, he helped police identify one of the killers from his hospital bed.

Bauman was in hospital for a total of four weeks, during which time Hurley never left his side.

The hardest thing for Bauman to relive in the making of the film were the hospital scenes — particularly one that shows his character getting his bandages changed for the first time.

“Reliving the hospital is insanely hard,” Bauman tells PEOPLE of watching the film now. “It made me cry.”

While Stronger opens with the marathon, the bulk of the film centers on Bauman’s recovery — both physical and emotional.

“Jeff was thrust into a situation not of choosing in any way,” Gyllenhaal tells PEOPLE of Bauman. “What he went through, what he goes through every day and who he has become as a result of that event—it’s beyond words.”

During his time in the hospital, Bauman was fitted with two prosthetic legs. Through intense physical therapy, he learned how to walk again.

But his recovery didn’t come without setbacks. After leaving the hospital, Bauman fell into a depression and began coping with alcohol. Eventually, it began to take a toll on his relationship with Hurley.

“It’s really tough for me to see that now. I didn’t see it then,” he told TIME of how poorly he treated his girlfriend. “I knew she was there with me. I kind of pushed her away. That’s kind of how we are. We love each other, but I’m always pushing her away.”

At one point, the couple broke up, which served as a wakeup call to Bauman. He and Erin had a daughter Nora in July 2014 and wed a few months later.

Boston and the world lauded him a hero for surviving. Now, Bauman says he’s focusing on the next steps in his life — both literally and figuratively.

Bauman says he cut out alcohol 15 months ago and has gone back to school full-time to pursue a mechanical engineering degree.

In February, Bauman and Hurley announced their plans to separate.

“Jeff and Erin have decided that it is best to move forward as friends,” a spokesperson for the couple said in a statement. “Though their relationship has changed, their admiration, love and mutual respect for each other will never waver. They are dedicated to loving and parenting their daughter, Nora, and ask for privacy.”

Four years after the bombing, Bauman proudly walked the red carpet alongside Gyllenhaal at the premiere of Stronger. Hurley also attended the premiere.

“It’s great to see my progression,” he tells PEOPLE. “A year ago I was using a cane, so every year it gets easier.” 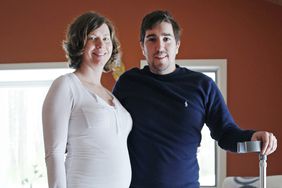 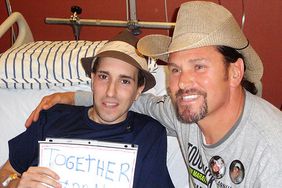 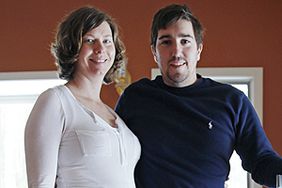 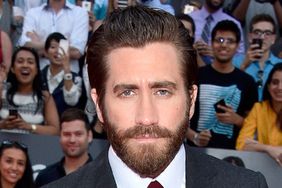 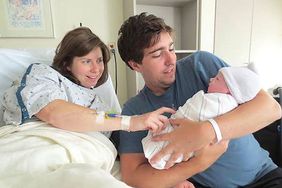 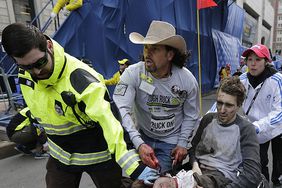 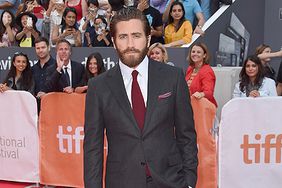 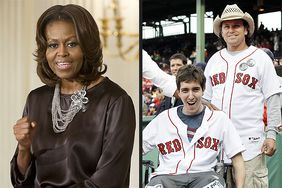 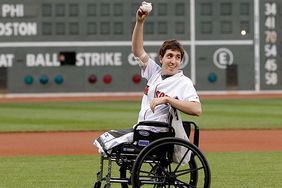