These stars know how to make an entrance!

The Venice International Film Festival is back and boy, are celebrities happy about it. Click through to see the stars arriving for the Italian festival (which runs from Sept. 1 to Sept. 11).

On Top of the World

Timothée Chalamet got a bird's-eye view from atop a water taxi while arriving for the screening of Dune on Sept. 3.

Earlier that day, Chalamet was much more casual, arriving on Sept. 3 with Dune director Denis Villeneuve.

Jury President Bong Joon-ho arrived at the festival on Sept. 1, keeping cool with a fan.

Zendaya looked laid-back and relaxed while arriving on Sept. 3 in a Valentino Couture dress.

Zendaya wowed later that same day in a slicked-back, glam look — which included a nude Balmain gown and 93-carat emerald necklace from Bulgari — for the Dune premiere.

Jessica Chastain (and her bangs!) made an arrival at Venice Film Festival on Sept. 5.

Scenes from an Arrival

Scenes from a Marriage costars Oscar Isaac and Chastain waved as they arrived by water taxi on Sept. 4.

Cynthia Erivo wore an oversized pair of sunnies and baggy jeans upon her arrival to the 2021 Venice International Film Festival on Sept. 2.

Roberto Benigni looked thrilled to be back at the Venice Film Festival. The Italian actor smiled big and threw his arms open as he arrived on Sept. 1.

Penelope Cruz and director Pedro Almodóvar arrived for a screening on Parallel Mothers, which opened the festival this year, on Sept. 1.

Molly Sims made a statement in a silver sequined gown with puffy sleeves on Sept. 2.

Matt Dillon gave a smile and wave while arriving on Sept. 1.

Nina Zilli rocked a black-and-white ensemble while arriving on Sept. 5.

Kristen Stewart arrived on Sept. 3 via ... luggage cart? No! The Spencer actress arrived via water taxi, but looked tempted to catch a ride!

Kirsten Dunst waved to the crowd while arriving at the festival on Sept. 2.

The Power of the Dress

Dunst stunned in a black gown on Sept. 2 as she arrived for a screening of her film, The Power of the Dog.

Bianca Balti arrived at the festival on Sept. 1 — with some help, of course, for her stunning gown!

Benedict Cumberbatch arrived on Sept. 2. His film The Power of the Dog got a four-minute standing ovation, though we wish this pale blue jacket moment got one, too!

Anya Taylor-Joy arrived on Sept. 5 with a smile on her face — after a five-minute standing ovation for Last Night in Soho we can understand why!

Antonio Banderas and girlfriend Nicole Kimpel arrived together on Sept. 3.

Maggie Gyllenhaal — who made her directorial debut at this year's festival with The Lost Daughter — arrived on Sept. 2 with husband Peter Sarsgaard (who also acted in the film).

Adriana Lima shared a kiss with her boyfriend, Andre Lemmers, as they arrived on Sept. 2.

Jamie Lee Curtis soaked up some sunshine upon her arrival on Sept. 8. The actress was awarded a Golden Lion for lifetime achievement at the festival.

Jennifer Lopez and Ben Affleck made a splash as they arrived by boat on Sept. 9 ahead of Affleck's The Last Duel premiere. 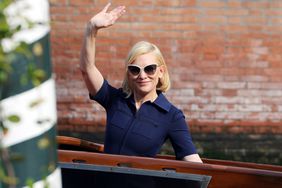