The nerd is strong in this one.

Rogue One: A Star Wars Story director Gareth Edwards is in geek heaven filming the first of a series of franchise spin-offs – but one moment in particular was almost too good to be true.

James Earl Jones, the original smoky voice behind Darth Vader, is returning to play the iconic villain in Rogue One, as Entertainment Weekly previously confirmed. Jones recently recorded some of his lines, and needless to say Edwards was pleased with his delivery.

“I got a very early Christmas present … we did a voice recording of a man named James Earl Jones,” Edwards said Friday during a Rogue One panel at the Star Wars Celebration, held in London’s ExCeL Exhibition Centre.

“He does this one line where he says the word power. And we had a nerdgasm,” he added.

Jones was not the only Star Wars icon to bring out Edwards’ inner geek. He recently had a surprise visit on set from the series creator himself, George Lucas.

“I challenge anyone to have as surreal an experience as showing a Star Wars film to George Lucas for the first time,” he said.

“None of this would be happening if it was not for George Lucas,” he added. “The guy’s a genius.”

Felicity Jones, who stars as Jyn Erso, was also on the panel and received an exciting gift: her character’s first doll. “Oh my goodness,” she said as she was given the first publicly seen piece of memorabilia from the upcoming movie.

“Thank you very, very much. I feel privileged to have joined the Star Wars model universe.”

She also revealed that it has a gun belt inspired by Hans Solo.

And Alan Tudyk, who plays a droid, said he got to meet the original droid, C-3PO’s Anthony Daniels.

“He asked me if I wear a suit or are you CGI. I said that I’m CGI. He nodded and said, ‘You s—!’ ” Daniels had to be screwed into his C-3PO suit in those early films.

“He’s a lovely man and we’ve been pals to this day,” Tudyk added.

Star Wars Celebration continues through Sunday and is being live-streamed via StarWars.com.

• With reporting by MARY GREEN 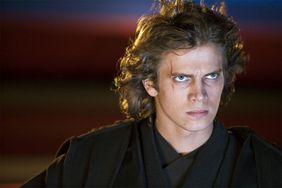