The late Marvel legend, famous for his cameos, appears in the Wreck-It Ralph sequel.

Marvel legend Stan Lee died earlier this week at 95 — but he’s not going away anytime soon.

Famous for his cameos in numerous Marvel films and television shows, Lee made brief but memorable appearances in movies like Deadpool and Thor.

Before his death, Lee completed cameos in several upcoming films, including one for Disney’s Ralph Breaks the Internet, out next week. The animated sequel to 2012’s Wreck-It Ralph features a brief appearance from an animated version of Lee, marking his first cameo since his death.

In the scene, Vanellope (the character voiced by Sarah Silverman) bumps into a man in the “Oh My Disney” area of the Internet. The man turns around, revealing himself to be Lee.

Ralph directors Rich Moore and Phil Johnston recently told The Wrap that Lee had not seen the cameo before he died.

“He did not see it,” Moore said. “That scene seems very poignant now on his passing, and it’s very special that we were able to have him as part of our film.”

Originally, the directors shared, Lee’s cameo was going to be featured in a longer, more Marvel-centric scene.

“For a moment, we had this thing called ‘Marvelize Yourself,’” Johnston said, “where the human avatar is able to go through what looks like a metal detector and turn into a Marvel character.”

“As part of that scene, we had Stan Lee go through the Marvelizer. But when we decided to lose that joke and not use the scene, we still wanted to have Stan Lee in the movie, because we love Stan Lee,” Johnston added.

Lee helped create many of the beloved Marvel superheroes who have gone on to inspire dozens of movies, TV shows and video games. Everyone from Spider-Man and The Hulk, to Ant-Man and Thor came from the mind of the New York City native. 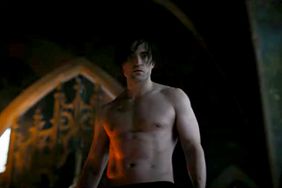 Robert Pattinson's 'The Batman' and Fifth 'Scream' Are Most Anticipated Movies of 2022, Per IMDb