"I haven't retired and not a lot of people know that," Michael Caine wrote on Twitter, after alluding to his retirement from acting

Michael Caine isn't taking his final bow quite yet.

The two-time Academy Award winner, 88, clarified that he hasn't retired in a brief tweet on Saturday, just a day after he said that his latest movie might be his last. "I haven't retired and not a lot of people know that," Caine wrote on Twitter.

He previously alluded to his retirement from acting Friday on the BBC Radio show Kermode and Mayo's Film Review, following what would have been his final onscreen appearance in the new film Best Sellers.

"Funnily enough, it has turned out to be what is my last part, really," Caine explained. "Because I haven't worked for two years, and I have a spine problem, which affects my legs. So, I can't walk very well.

"And I also wrote a book, a couple of books, which were published and were successful. So, I'm now not an actor, I'm a writer, which is lovely because as an actor, you have to get up at half past 6 in the morning and go to the studio. As a writer, you can start writing without leaving the bed," he added.

Caine stars in Best Sellers as famed cantankerous writer Harris Shaw, who reluctantly agrees to go on a tour promoting his first book in decades, after his publisher Lucy Stanbridge (Aubrey Plaza) tracks him down to help save her late father's publishing house. The film, which shot in Montreal in 2019, also stars Scott Speedman, Cary Elwes and Ellen Wong.

"I think it would be [my last role]," Caine added. "There haven't been any offers, obviously, for two years, because nobody's been making any movies I want to do. But also, I'm 88. There aren't exactly scripts pouring out with a leading man who's 88."

The Dressed to Kill actor made his breakout performance in the 1964 war film Zulu, before going on to star in such films as Alfie (1966), The Italian Job (1969), Get Carter (1971) and The Man Who Would Be King (1975). With two Academy Awards and three Golden Globes under his belt, he's enjoyed a steady amount of work, most recently starring in Christopher Nolan's Tenet and the Charles Dickens reimagining Twist.

Caine has also written six books since 1984, with his most recent being Blowing the Bloody Doors Off: And Other Lessons in Life, published through Hachette Book Group in 2018.

See Michael Caine in Best Sellers, which is now available on VOD. 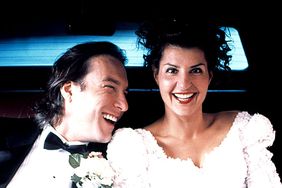