Shailene Woodley confirmed her engagement to Aaron Rodgers in February

Shailene Woodley is taking her time in planning her wedding.

Months after confirming her engagement to with fiancé Aaron Rodgers, the Last Letter from Your Former Lover star, 29, revealed that she hasn't made any solid plans in her nuptials with the 37-year-old Green Bay Packers quarterback.

"There's no wedding planning happening," she told Entertainment Tonight in an interview published Monday. "There's no rush. We've got no rush."

The actress added that she and Rodgers have simply been "enjoying" their time together as an engaged couple.

Woodley started dating Rodgers last year amid the COVID-19 pandemic. In her July/August cover story with Shape, she explained that being in lockdown with the football player helped bring them closer together.

"Starting a relationship where you immediately move in with someone — because it's a pandemic and you can't just get on a plane and go back and forth on weekends — taught us a lot about each other very quickly," Woodley said. "We jumped in headfirst and got some of the sticky bits out of the way early."

Reflecting on their whirlwind romance, Woodley added, "I have the perspective that I would have met Aaron in any context, any space in time, because I feel we were meant to be together."

PEOPLE confirmed Woodley and Rodgers' relationship in February, with a source sharing that Rodgers was very happy with Woodley.

Days later, the football player announced their surprise engagement in his acceptance speech when he was named the league's MVP during the NFL Honors broadcast on Feb. 6.

Later in February, Woodley also confirmed their engagement, telling late-night host Jimmy Fallon: "Yes, we are engaged. But for us, it's not new news, you know, so it's kind of funny. Everyone right now is freaking out over it and we're like, 'Yeah, we've been engaged for a while.' "

Woodley spoke about the pair's decision to wait before publicizing their engagement in her latest interview with The Hollywood Reporter, explaining, "When we announced that we were engaged, we wanted to do that only because we didn't want someone else to do it before we did."

"And we didn't do it for months and months after we had become engaged," she said.

Added Woodley, "But the reaction to it was really a lot, and so we were like, 'Let's just politely decline [to talk about the relationship] for a little while and live in our little bubble.' " 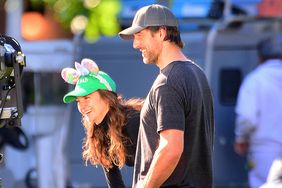