Shailene Woodley is offering some new insight into her private relationship with fiancé Aaron Rodgers.

While chatting with The Hollywood Reporter for their latest cover story, the 29-year-old actress opened up about her romance with the quarterback, 37, and why the pair didn't initially share their engagement news with the world.

"When we announced that we were engaged, we wanted to do that only because we didn't want someone else to do it before we did," Woodley said. "And we didn't do it for months and months after we had become engaged."

"But the reaction to it was really a lot, and so we were like, 'Let's just politely decline [to talk about the relationship] for a little while and live in our little bubble,'" the Big Little Lies star added.

Woodley and Rodgers were first romantically linked back in February. At the time, PEOPLE confirmed their relationship with a source sharing that Rodgers was very happy with Woodley.

Then days later, the football star announced their surprise engagement in his acceptance speech when he was named the league's MVP during the NFL Honors broadcast on Feb. 6.

Later in February, Woodley also confirmed their engagement, telling late-night host Jimmy Fallon: "Yes, we are engaged. But for us, it's not new news, you know, so it's kind of funny. Everyone right now is freaking out over it and we're like, 'Yeah, we've been engaged for a while.'"

Rodgers has also raved about his wife-to-be and their relationship during an Instagram Live in March. "I'm recently engaged, so been enjoying that part of my life," he said at the time. "Obviously that's the best thing that's happened to me in the last year."

The NFL player previously dated race car driver Danica Patrick from January 2018 to July 2020. Woodley was last romantically linked to rugby player Ben Volavola, whom she met in January 2018 while filming Adrift, before revealing their split in an April 2020 interview with The New York Times.

While recently chatting with Shape for a cover interview for their July/August issue, Woodley also described her romance with her husband-to-be as nothing short of destiny.

"I have the perspective that I would have met Aaron in any context, any space in time, because I feel we were meant to be together," she said of their whirlwind romance. "Starting a relationship where you immediately move in with someone — because it's a pandemic and you can't just get on a plane and go back and forth on weekends — taught us a lot about each other very quickly."

"We jumped in headfirst and got some of the sticky bits out of the way early," Woodley added. 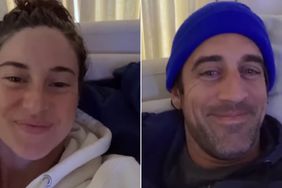 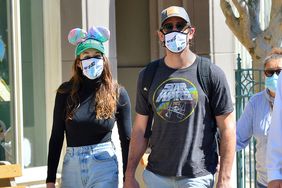