'Sex and the City' 's Willie Garson Throws Major Shade at Kim Cattrall as He Wades Into Movie Controversy: 'Because I'm Toxic'

Willie Garson is adding his voice to reports that Kim Cattrall was behind the cancellation of the film Sex and the City 3.

Garson, who played Carrie Bradshaw’s friend Stanford Blanch in the series and subsequent two films, implied in a tweet on Wednesday that Cattrall wasn’t being entirely truthful about her claims that she never wanted to do a third film.

“Dear fans, because I’m ‘toxic’, I’m going to negotiate a contract for 6 months, not come to terms, then say I never wanted to do it anyway,” he wrote.

Cattrall, who played Samantha on the popular HBO series has previously slammed reports that her demands led to the movie being shelved.

But a source close to the situation maintains to PEOPLE that Cattrall was a key factor in the movie being shelved. “Kim is trying to distract from what this is about — which is this: Kim killed the movie,” says the source. Cattrall has claimed that she has refused to board a third film since 2016, but the source tells PEOPLE she “was negotiating as recently as this summer” to join the movie. (Studio Warner Bros. has not commented.)

A second source also told PEOPLE that the cast “have had their issues over the years.”

During a sitdown with Piers Morgan for ITV‘s series Life Stories, Cattrall, 61, said that she had refused to board the movie multiple times throughout the past year. She also bashed reports by DailyMailTV that claimed the third movie was shelved because of Cattrall’s “outrageous demands” to the studio to produce other movies she had in development.

“It’s quite extraordinary to get any kind of negative press about something that I’ve been saying for almost a year of ‘no’ that I’m demanding or a diva,” Cattrall said, according to the Daily Mail. “The answer was always no and a respectful, firm, no.”

Cattrall then called out Parker — who would have been a producer on the film: “And this is really where I take to task the people from Sex and the City and specifically Sarah Jessica Parker in that I think she could have been nicer.”

RELATED: Sarah Jessica Parker Admits She Begged to Get out of ‘Sex and the City’ – Before Falling for Carrie

Cattrall and Parker’s reps have not responded to a request for comment.

Parker told Extra that Sex and the City 3 had a “beautiful, funny, heartbreaking, joyful, very relatable script and story.”

“It’s not just disappointing that we don’t get to tell the story and have that experience, but more so for that audience that has been so vocal in wanting another movie,” she said.

Rumors that Samantha, Carrie, Charlotte (Kristin Davis) and Miranda (Cynthia Nixon) were reuniting for a new film — which would follow 2008’s Sex and the City and 2010’s Sex and the City 2 —had long swirled before Parker’s announcement that the movie was off.

Parker wasn’t the only one feeling regret for Sex and the City’s end. Garson also previously tweeted that he was “disappointed” for the crew members who counted on working on the third installment.

“Disappointed for all crew holding on for negotiations to conclude for their jobs, and of course, for the fans. Leave it at that,” he wrote. 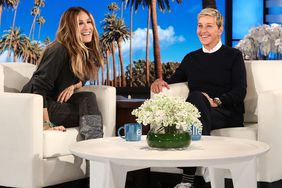