"It's sad what's going on between the lawyers," the Doctor Strange star said in an interview published Wednesday

Benedict Cumberbatch is chiming in on Scarlett Johansson's lawsuit against Disney.

The 45-year-old Doctor Strange actor commented on his Marvel costar's actions in an interview with The Hollywood Reporter, published Wednesday.

"It's sad what's going on between the lawyers," he said. "Just the verbiage and the accusations of, 'Put it in a global pandemic context.' The whole thing's just a bit of a mess."

Johansson, who played Black Widow for a decade before retiring from the role in June, sued Disney in July, alleging the company breached its contract with her by releasing Black Widow on the Disney+ streaming service (with Premier Access) at the same time it hit theaters.

As Cumberbatch noted, many in the industry are still attempting to figure out the proper way to compensate artists for their work, especially with a billion-dollar entity like Disney.

"It's a new paradigm, and it's a very complex one," he said. "No one saw this coming, and no one should use hindsight to say, 'Well, it should have been done.' That was the first of these films that was going to get a cinematic release during the pandemic and got stalled and stalled and stalled. It's very new territory."

In the suit, Johansson claims her contract with Disney's Marvel Entertainment was for a guaranteed exclusive movie theater release and that her salary largely depended on the film's box office performance. (Disney took in $372.3 million worldwide, including $67 million from Disney+, according to Box Office Mojo.)

"Disney intentionally induced Marvel's breach of the agreement, without justification, in order to prevent Ms. Johansson from realizing the full benefit of her bargain with Marvel," the suit said.

In a statement obtained by PEOPLE, Johansson's attorney John Berlinski accused Disney of attempting to inflate its stock price by releasing Black Widow and other films on Disney+ the same day they hit theaters.

"It's no secret that Disney is releasing films like Black Widow directly onto Disney+ to increase subscribers and thereby boost the company's stock price — and that it's hiding behind COVID-19 as a pretext to do so," said Berlinski.

"But ignoring the contracts of the artists responsible for the success of its films in furtherance of this short-sighted strategy violates their rights and we look forward to proving as much in court," he continued. "This will surely not be the last case where Hollywood talent stands up to Disney and makes it clear that, whatever the company may pretend, it has a legal obligation to honor its contracts."

A Walt Disney Company spokesperson later released a statement blasting the lawsuit as meritless and claiming Disney had fully complied with Johansson's contract.

"The lawsuit is especially sad and distressing in its callous disregard for the horrific and prolonged global effects of the COVID-19 pandemic," the statement said.

The spokesperson also argued that the release of Black Widow on Disney+ had "significantly enhanced her ability to earn additional compensation on top of the $20M she has received to date."

Berlinski later accused Disney of "trying to hide its misconduct" after the company filed for arbitration in August.

"Why is Disney so afraid of litigating this case in public?" he said in a statement. "Because it knows that Marvel's promises to give Black Widow a typical theatrical release 'like its other films' had everything to do with guaranteeing that Disney wouldn't cannibalize box office receipts in order to boost Disney+ subscriptions. Yet that is exactly what happened — and we look forward to presenting the overwhelming evidence that proves it."

In August, fellow Avengers star Elizabeth Olsen praised the actress during a conversation with Jason Sudeikis for Vanity Fair.

"I think she's so tough and literally when I read that I was like, 'Good for you Scarlett,'" Olsen remarked.

Earlier that month, Get Out producer Jason Blum said the lawsuit is "a much bigger existential fight that she's really leading" in an interview with THR.

"It's a very difficult thing to do, it's really brave to do and she's fighting for all of talent," the 52-year-old producer said of Johansson. 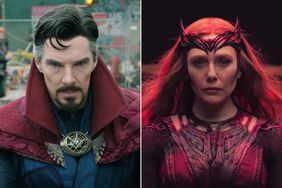