Randall, the actress and her two children, Louis, 8, and Laila, 5, were joined at Disneyland by Jason Bateman, his wife Amanda Anka and their children, Francesca, 11, and Maple Sylvie, 6.

Sandra Bullock, her kids and boyfriend Bryan Randall had a blast at the happiest place on earth on Monday.

Randall, the actress and her two children, Louis, 8, and Laila, 5, were joined at Disneyland by Jason Bateman, his wife Amanda Anka and their children, Francesca, 11, and Maple Sylvie, 6.

“She seemed to be having fun,” an onlooker said of Bullock, 53.

Sandra Bullock and Bryan Randall in 2016.

Bullock and Randall “looked like a good happy family,” the source added, noting that Randall “was carrying one of the children on his shoulders” and doing all “the regular dad stuff at Disneyland.”

The two families were spotted riding coasters like Radiator Springs Racers, Soarin’ and Matterhorn Bobsleds among others. The kids snacked on churros and were treated to lightsaber toys after riding the Star Tours ride. The group later lunched at the Pizza Port restaurant.

Bullock started dating Randall, a Los Angeles-based photographer, in the summer of 2015. “They started dating after Bryan photographed [Bullock’s son] Louis for his graduation,” a source told PEOPLE at the time.

Jason Bateman and Amanda Anka in 2014.

In 2016, rumors began circulating the couple planned to tie the knot. But Bullock‘s rep told PEOPLE at the time that the duo were not secretly planning a wedding.

“Sandra Bullock is not engaged and there is no wedding,” said the actress’s rep. “There’s no truth at all in those rumors.”

Bateman and Anka, who married in 2001, are also close friends with the recently split Jennifer Aniston and Justin Theroux. The duo and former couple often vacationed together, and spent this past New Years in Cabo San Lucas, Mexico. 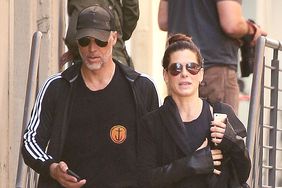