The actors teamed up to sing an array of several classic songs together, including "I Remember You" and "A Fine Romance"

Talk about a dino-mite duet!

Sam Neill and Jeff Goldblum teamed up to sing an array of several classic songs, including "I Remember You" and "A Fine Romance," on their day off from filming the latest iteration in the Jurassic Park film series, Jurassic World: Dominion.

Shared to social media on Monday, the first clip featured Neill, 72, and Goldblum, 67, tackling the song "I Remember You," which was originally performed by Dorothy Lamour in 1942’s The Fleet’s In.

In another video, the pair sang Swing Time’s "A Fine Romance," before they also covered My Fair Lady’s "I’ve Grown Accustomed to Her Face" in another post.

"It’s a day off. So we’ve been singing a bunch of old songs. Jeff won’t practice, so it’s first go or nothing," Neill wrote in the caption of the "A Fine Romance" video. "@jeffgoldblum makes me laugh immoderately."

Goldblum and Neill are set to make their triumphant return to the Jurassic Park franchise when Dominion hits theaters next summer.

The two will return alongside fellow Jurassic Park cast members Laura Dern and B.D. Wong, as well as Jurassic World regulars Chris Pratt and Bryce Dallas Howard for the final story in the new trilogy of films.

Neill previously told Yahoo Movies UK that his role in the sequel would be more than a cameo, saying, "We’re all the way through the film, Jeff, and me, and Laura," before he jokingly added that he "probably won’t be running quite as fast as I was 27 years ago!"

The actor also noted that he couldn't wait to work alongside his "dear friends" once more, as well as his new co-stars, adding that the entire cast would be in quarantine together while the production resumed.

"We’re all going to be living in the same joint for three or four months, so that’s going to be fun. And everybody loves Chris and Bryce as well, so I think we’ll be a very happy bunch," he shared.

Filming for Dominion previously came to a halt in March amid the ongoing coronavirus pandemic but picked back up and resumed production in the United Kingdom on July 6.

Pratt, Dallas Howard and director Colin Trevorrow previously announced the upcoming sequel's ominous title on the first day of filming with both Pratt and Trevorrow posting a shot of a clapperboard with the name front and center.

Pratt also shared the definition of the word dominion, which points at the characters’ attempt to win control back over from the escaped dinosaurs.

Earlier this year in August, a new photo from the set of Dominion teased that the final installment in the new trilogy will return to an iconic franchise location.

Trevorrow shared a photo from the upcoming film's set with Jurassic Park fansite, Jurassic Outpost, that features a cold storage container that has "Site B Isla Sorna" labeled across it inside a lab.

Jurassic Park fans will remember that Isla Sorna was first seen in the Jurassic Park sequel, Jurassic Park: The Lost World and was later revisited again during Jurassic Park 3, as the island where InGen would breed new dinosaurs before transporting them to Isla Nublar, the site of the main Jurassic Park. 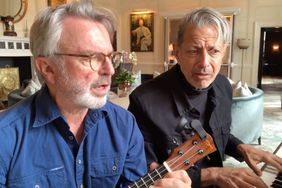 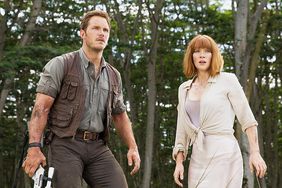