The Frida actress collaborated with her friend Jolie on Without Blood, an intense drama about trauma in the aftermath of war. “It was a joy to suffer so much," says Hayek

Eric Andersson is a Senior Writer for Movies at PEOPLE and PEOPLE.COM. He has covered the entertainment business for two decades, visiting film and TV sets all over the world and interviewing celebrities such as Oprah Winfrey, Courteney Cox, Julia Garner, Tony Goldwyn, Sacha Baron Cohen and Josh Duhamel. Before joining the team at PEOPLE, Eric was on staff at TV Guide Magazine and Us Weekly and has contributed to publications including The Wall Street Journal.

Salma Hayek has high praise for her pal Angelina Jolie.

In the new issue of PEOPLE, the Oscar-nominated Frida actress, 55, calls Jolie, 47, who directed Hayek in the upcoming drama Without Blood, "probably the best director I've ever worked with. And I worked with some pretty good ones."

Indeed, Hayek's résumé is filled with movies directed by some of the best in the business, including Oscar winners Oliver Stone, Steven Soderbergh and Chloé Zhao, who directed her in Savages, Traffic and The Eternals, respectively.

Other industry bigwigs Hayek has worked with include Ridley Scott (House of Gucci), Julie Taylor (Frida) and Robert Rodriguez (Once Upon a Time in Mexico, Desperado and The Faculty).

Continues Hayek of Jolie, "I've always loved her as a director, but I think this might be her best, or one of the best." Jolie has directed five feature films, including the World War II film Unbroken and the drama By the Sea, which she made with then-husband Brad Pitt in 2015.

Without Blood, which has no release date scheduled, is based on the 2002 novel by Alessandro Barrico. "An unforgettable fable set in the aftermath of an unidentified conflict, it explores universal truths about war, trauma, memory, and healing," according to a press release from the movie's production company, Fremantle.

If that sounds heavy, Hayek confirms that it is. She tells PEOPLE she has yet to "recover" from making the movie. "It was a tough film to do. And then somehow, it was a joy to suffer so much [because]...she was shockingly good."

Her costar in the movie, Demián Bichir, agreed with Hayek, according to the actress: "He was saying to me, 'This is the hardest thing, like the most intense project I've ever done in my life, with the highest level of complexity.' And I said, 'I'm so glad you say that… me, too.'"

Hayek admits she paused before saying yes to working with Jolie, her costar from the 2021 Marvel movie, The Eternals. "There's always hesitation: Am I putting my friendship in jeopardy right now?" she says. "And wow, I have a whole other level of respect [for her]."

Even so, she's not above getting a little silly with her friend. Last year, Jolie pushed Hayek's face into the Desperado star's birthday cake, part of a Mexican tradition known as la mordida. Hayek has yet to return the favor— "I thought about it, but we were about to shoot," she says—but Jolie better watch her back (or face, for that matter). "I'm going to get her next," says Hayek. "I promise you." 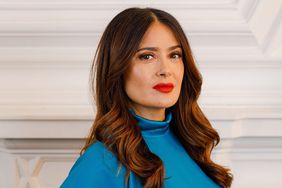 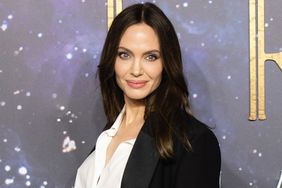 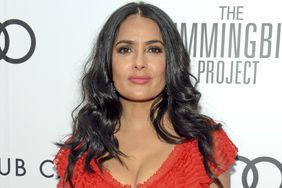 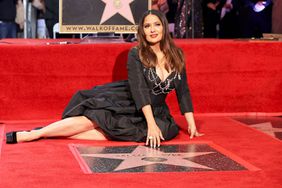 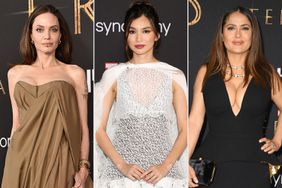