The actor, 56, told GQ in a career retrospective video that he had sworn Giamatti’s mother, Toni Marilyn Giamatti, her son would receive an Oscar nomination for his portrayal in their 2005 film Cinderella Man.

Crowe explained that when he’d starred in the 1999 film The Insider with Al Pacino, the iconic actor had told the studio to “back the kid” in the Oscars race.

The Gladiator star decided he would pay it forward for Giamatti, 53.

“Paul Giamatti’s mom died during the course of shooting Cinderella Man and I made her a promise on the phone that Paul was such an incredible actor, that he would be nominated,” Crowe said.

He continued, “And the studio asked me what I wanted to do, and I said, ‘Back the kid.’ And Paul Giamatti got an Academy Award nomination.”

A rep for Giamatti did not immediately respond to PEOPLE's request for comment.

Cinderella Man follows the real story of heavyweight boxing champion James J. Braddock who decides to go back into the sport during the Great Depression in order to support his family.

Giamatti portrayed Braddock’s longtime manager and friend, Joe Gould. The actor was given the only acting Oscar nomination of the cast for Best Supporting Actor.

The film also starred Renée Zellweger and was directed by Ron Howard.

In June, Crowe revealed he’d made sure his dying uncle, New Zealand cricket player Dave Crowe, was able to see Gladiator months ahead of its release before his death in May 2000 at the age of 66.

For the film’s 20th anniversary 4K/Blu-Ray release, the actor said his uncle, who “hadn’t spent more than like an hour and a half or two hours awake for about 10 days” stayed alert to see Crowe on screen as the gladiator Maximus.

“I got to screen the movie for him and he stayed awake like 14 hours that day,” he said. “Everybody in the family was just amazed.” 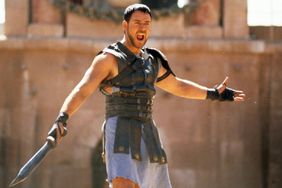