Robert De Niro is firing the latest shot at his ex-employee in their ongoing legal battle.

The Oscar winner filed new documents alleging Graham Chase Robinson sent him an email in August 2019 claiming she would divulge private information about the actor.

According to court documents obtained by PEOPLE, the email “contained veiled threats that if Robinson’s demands were not met, she would publicly disclose information of a personal nature regarding De Niro.”

De Niro says in the documents the email came just days before his company, Canal Productions, first sued Robinson for allegedly abusing her position to inappropriately use “her employer’s fund for her personal gain.” The actor is seeking $6 million in damages.

De Niro also claims Robinson sent another email later in August, in which she threatened to write a memoir about the actor if her undisclosed demands weren’t met.

Robinson was first hired by De Niro in 2008 and was later promoted to Vice President of Production & Finance. She quit abruptly in April of last year, with De Niro’s Canal Productions suing her months later for alleged misuse of company funds and workplace misconduct, including binge-watching Netflix for hours at a time.

According to court documents obtained by PEOPLE at the time, De Niro says Robinson ran up huge gratuities bills on the company American Express card. De Niro also said she used millions of De Niro’s frequent flyer miles for personal trips, and submitted false information to get paid for 96 days of “unused” vacation time, for which she received $70,000, per the filing.

In October, Robinson filed a counter-suit for $12 million against the actor and his production company, claiming gender discrimination. Robinson alleged De Niro used sexist language and made suggestive jokes in her presence. Robinson also alleges that she was underpaid compared to her male colleagues and was often given “female duties like housework.”

“Robert De Niro is someone who has clung to old mores,” the lawsuit reads. “He does not accept the idea that men should treat women as equals. He does not care that gender discrimination in the workplace violates the law. Ms. Robinson is a casualty of this attitude.”

De Niro’s attorney Tom Harvey said in a statement at the time, “The allegations made by Graham Chase Robinson against Robert De Niro are beyond absurd.” 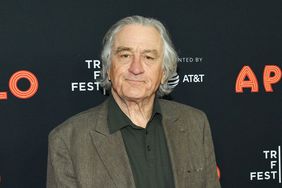