Watson stars as Angela, a young woman who accuses her father of sexual abuse

Regression is not quite the Harry Potter reunion fans might have been waiting for, but the horror film shows a whole new side of Emma Watson.

When her father admits to guilt to Detective Bruce Kenner (Ethan Hawke) without recollection of the incident, psychologist Dr. Raines (Thewlis) steps in to help him recover his memories and what they discover lands them in the middle of a nationwide conspiracy.

The thriller, which takes place in 1990s Minnesota, is directed by Alejandro Amenébar and is set for an Aug. 28 release. 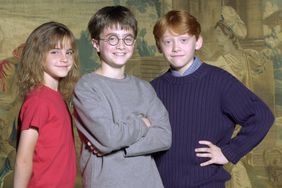