From being a ‘90s power couple to co-parenting together, here's a look at Reese Witherspoon and Ryan Phillippe's relationship

Back in the '90s, Reese Witherspoon and Ryan Phillippe were one of Hollywood's "it" couples.

After starring in the hit film Cruel Intentions together, Witherspoon and Phillippe quickly became a beloved duo. The young couple ended up getting married and went on to have two kids, their daughter Ava and son Deacon.

A few years after tying the knot, however, Witherspoon and Phillippe split up, finalizing their divorce in 2008. Despite their breakup, the pair have managed to work out a seemingly successful co-parenting situation, and are regularly spotted together while celebrating milestones for their kids.

The former couple have both moved on (Witherspoon is married to Hollywood agent Jim Toth and Phillippe has been linked to a few different women since the divorce), and have nothing but nice things to say about each other in interviews.

Here's a look back at Reese Witherspoon and Ryan Phillippe's relationship.

1997: Reese Witherspoon and Ryan Phillippe meet at a birthday party

Although it is widely believed that Witherspoon and Phillippe met on the set of Cruel Intentions, the two had been quietly dating for a bit before they even started filming the movie.

During a 1998 interview with Jane magazine, Witherspoon said they met at her 21st birthday party. "I don't know what came over me — maybe the seven Midori sours — but I told him, 'I think you're my birthday present,' " she told the publication. "He thought it was so flattering and now that I think about it … how embarrassing!"

It didn't take long for Witherspoon and Phillippe to take things to the next level. The couple got engaged about a year after meeting.

In a 2019 interview with Entertainment Weekly, Witherspoon admitted that she had to be talked into taking the role of Annette in the film. "We were wooing her!" Phillippe said. "She loved the movie for me, but it wasn't a great part at the time for her. She helped [writer-director] Roger turn it into one."

The couple got married only a few weeks after Cruel Intentions came out. They tied the knot in Charleston, South Carolina at the Old Wide Awake Plantation along the Stono River. At the time, Witherspoon was several months pregnant with their daughter, Ava.

Just three months after their wedding, Witherspoon gave birth to their first child, a daughter named Ava. The Big Little Lies star was just 23 years old at the time. She later spoke about being a young mother during an appearance on The Drew Barrymore Show.

"To be completely candid, I was terrified too," she said. "I got pregnant when I was 22 years old, and I didn't know how to balance work and motherhood, you just do it."

Witherspoon added, "I was just like every other mom and dad trying to figure it out."

March 24, 2002: Reese Witherspoon and Ryan Phillippe present an award at the Oscars

At the 2002 Oscars, Witherspoon and Phillippe took the stage to announce the winner for achievement in makeup. While at the podium, Phillippe told Witherspoon she should read the winner's name, saying, "You make more than I do, so go ahead."

Years later, in 2020, Witherspoon talked about that moment with journalist Margaret Gardiner on The HFPA in Conversation podcast. After admitting she had forgotten about that particular Oscars moment, Witherspoon said, "He did say that, and no, it wasn't scripted."

She went on to say, "He didn't tell me he was going to say that before it happened on air. So I was a little bit flummoxed in the moment too."

"There's so few women that make a lot of money that sometimes they're shamed for it, and sometimes they are expected to give more and do more and be more to others in the same position that say a male movie star would not be expected to," the actress added. "And that's just a double standard that exists in our society. But I do think gender norms have changed quite a bit since that moment in 2000."

August 2002: Ryan Phillippe says he and Reese Witherspoon are in couples therapy

Phillippe told New York's Daily News that the pair were putting in the work with their marriage and attending couples therapy.

"The biggest mistake," he said, "is not doing that, ignoring it and having the marriage fall apart because of laziness."

Around the same time, Witherspoon also opened up to PEOPLE about their relationship, saying, "I'm not interested in the fallacy of the Hollywood relationship: 'We have perfect children who never cry; we never have problems; we never argue, we're always best friends.' That's just not true. We're normal people with normal problems."

About four years after having their daughter, the couple welcomed their second child, a son named Deacon.

Three years after having their son, Witherspoon and Phillippe announced they were splitting up in a joint statement.

"We are saddened to announce that Reese and Ryan have decided to formally separate," a rep for the couple said. "They remain committed to their family and we ask that you please respect their privacy and the safety of their children at this time."

February 11, 2008: Ryan Phillippe opens up about his split from Reese Witherspoon

Not long after his marriage ended, Phillippe revealed in an interview with W magazine that the divorce was "the darkest, saddest place I've ever been."

"There were a good four or five months of not being able to get out of bed," he said. "It was the worst time of my life."

The actor continued, "You get through it. It's a process that's not easy, but I get less and less sad about it every day."

Phillippe also addressed the rumors that his affair with Abbie Cornish had led to his divorce with Witherspoon, saying the real reason was "far more complicated and far less interesting than it's made out to be. To look and search for these salacious reasons, to pin it on a person, or a moment in someone's life, it's not realistic."

When asked about Cornish, Phillippe said, "It was unfair for her to be called the names that she was, because it wasn't about that. I don't think an outside person can ever cause a divorce. I had difficulties in my relationship, and in my marriage, long before I ever met her."

May 12, 2010: Ryan Phillippe says "things are great" between him and Reese Witherspoon

During an interview with Ellen DeGeneres on The Ellen Show, Phillippe was asked about his co-parenting relationship with Witherspoon.

"Things are great," he responsded. "It is so important as divorced parents to keep that connection. It makes the kids feel better that the parents are interacting. We go to all the school events together, and we're there for each other."

Phillippe added that because of their busy work schedules, finding balance can be difficult, but they make it work. "We've done a really good job with that, and our kids are happy and healthy and doing awesome," he said.

In the spring of 2011, Witherspoon remarried, tying the knot with Toth in a private ceremony at her Ojai, California ranch.

Prior to the wedding, when it was announced that Witherspoon was engaged, Phillippe had nothing but encouraging words to say about his ex-wife. "I'm very happy for both Reese and Jim," he told the New York Daily News. "I wish nothing but the best for the mother of my children."

October 6, 2014: Reese Witherspoon and Ryan Phillippe talk about Cruel Intentions with their kids

During a HuffPost Live interview, Phillippe shared that he and Witherspoon had talked to their kids about Cruel Intentions, saying the topic came up while the whole family was walking through Central Park together in New York City.

"We were reminiscing then because we shot a lot of Cruel Intentions [there], so there we were with Ava and Deacon talking, and they were tripping out on the fact that we were there shooting a movie before they were even a thought in our minds," Phillippe said.

When asked about his relationship with Witherspoon, the actor said, "It's going well, and she's happy and remarried, and our kids are incredible. I'm proud of the way we've handled it and who our little people are."

During an interview with CBS' 60 Minutes, Witherspoon opened up about her divorce from Phillippe and shared how hard the time period was. "Phew, that was a tough year that followed. I got divorced the next year and I spent a few years just trying to feel better," she said.

She went on to say that the struggles she experienced in her personal life at the time of their divorce had also affected her career. "You can't really be very creative when you feel like your brain is scrambled eggs," the actress explained. "I was just kind of floundering career-wise. I wasn't making things I was passionate about ... And it was really clear that audiences weren't responding to anything I was putting out there."

During an interview with Larry King, Phillippe talked about why his and Witherspoon's marriage didn't work, sharing that their "age" was "more of the problem" than the fact that they both worked in Hollywood.

"When we got together we were so young," he said. "I think it can create issues with two people in this industry because there's so much noise that goes along with it."

September 28, 2017: Reese Witherspoon talks about getting married to Ryan Phillippe at a young age

During an interview on the ITV show Lorraine, Witherspoon echoed Phillippe's sentiments about being too young when the pair married.

"I got married when I was 23 and I had two kids by the time I was 27. So, I think, I don't know. Sometimes it's good to know yourself," the Hello Sunshine founder said.

"I would never change anything," she added. "I said to my daughter, 25 you start to know yourself a little bit better."

The former couple celebrated their son Deacon's 18th birthday together and posed for a rare photo with him. Both Witherspoon and Phillippe posted the sweet family shot on social media and wrote loving tributes to Deacon in their captions.

"Happy 18th birthday to our gorgeous, smart, talented, and caring son," Phillippe wrote. "You are a true light in this world and are so loved by all who know you. We are lucky to be your mom and dad. Love you, pup..(I'd say we did pretty good @reesewitherspoon)."

A year later, the exes hosted a backyard commencement ceremony for Deacon's high school graduation. Phillippe "played principal" at the intimate gathering and posed with Witherspoon and the new graduate for a photo.

"Congrats to you @deaconphillippe on Graduating High School!" Witherspoon captioned the photo on Instagram. "So proud of the thoughtful, talented, kind & generous young man you have become. You light up our hearts and make us proud everyday. We love you!" 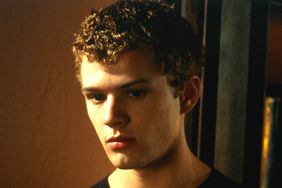