The President of Botswana Paid a Surprise Visit to the Set of 'A United Kingdom' , the Story of His Family: 'I Never Thought I'd See My Parents Again'

David Oyelowo and Rosemund Pike got a surprise visit from Ian Khama, the president of Botswana, while they were playing his parents in A United Kingdom

It’s not every day the president stops by.

David Oyelowo, 40, and Rosamund Pike, 38, were taken by surprise when the president of Botswana dropped in unannounced while they were shooting their new film A United Kingdom in the southern African nation, but President Ian Khama had a deep connection to the story.

The British actors play his parents, Seretse Khama and Ruth Williams — a tribal chief and his U.K.-born wife who battled resistance to their interracial marriage, took on the British Empire and eventually brought independence to Botswana.

President Khama “came to set unannounced, flew himself in his helicopter and sat down next to me on the monitors,” Oyelowo, 40, tells PEOPLE in the latest issue. “He watched Rosamund doing a scene and then turned to me and said, ‘I never thought I’d see my parents again.’ It was a really profound moment for us all.”

The Selma actor says the moment put the story into perspective for the cast and crew: “We literally watched him reliving his own history through what we were doing and that was very special for us. That was one of the advantages of getting to shoot in Botswana itself.”

Ian Khama (in the toy car) with his parents Seretse and Ruth and his sister Jacqueline in England.

Amma Asante, the director of the film, says that the president’s outlook on the movie changed when he saw Pike in character as his late mother.

“As with any movie you shoot on location, we had to ask the president permission to do so and he was very matter of fact about it,” Asante tells PEOPLE. “One day he flew himself on set and sat down behind the monitors and still had that matter-of-fact attitude. Then Rosamund came out from set and came towards me to ask me something and I sort of saw his whole demeanor change as he looked at her.”

Oyelowo and Pike in A United Kingdom.

“His existence is a reminder of what Seretse and Ruth’s love achieved,” she told reporters at the film’s premiere in New York City on Monday. “They brought democracy to this country and there is their son as the fourth president down the line.”

A United Kingdom is in theaters Friday. 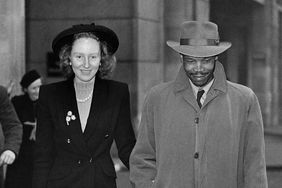 The African Prince and the English Clerk: The Amazing Real-Life Love Story Behind the Movie 'A United Kingdom' 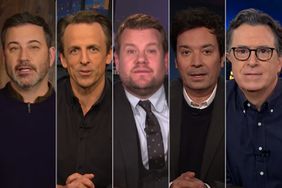 Movies to See If You're Off Work This Week