Meet Pom Klementieff, the Actress Behind the Buzzed-About New Character Mantis in' Guardians of the Galaxy Vol. 2' ' '

Fans of the franchise first met the new character in one of the sequel's trailers, learning that Mantis is an alien with empathic powers

The Guardians of the Galaxy universe has room for one more in their family of misfits, and French actress Pom Klementieff is ready to fill the shoes of Mantis.

Fans of the franchise first met the new character in one of the sequel’s trailers, learning that Mantis is an alien with empathic powers. She even calls out Star-Lord (Chris Pratt) on his infatuation with Gamora (Zoë Saldana) in front of a crowded room just by touching his hand, much to the amusement of Drax (Dave Bautista).

Get to know more about the 30-year-old actress joining the Marvel universe below.

1. The relatively unknown actress was an easy casting choice, according, to the film’s director

Despite having little exposure in Hollywood, director James Gunn praised Klementieff as “the most awesome and easiest person I’ve ever had to cast” during a recent Facebook video Q&A.

“She blew me away,” he said. “She’s amazing, and I can’t wait to share her with the world.”

Marvel conducted a wide search for the part — details of which were kept tightly under wraps — that called for an Asian actress, and the studio did several rounds of auditions to test for cast chemistry.

2. Mantis can change others’ emotions

On top of being able to feel the emotions of other characters, Klementieff told reporters that Mantis can also manipulate those feelings, according to ComingSoon.net.

“She can change emotions,” she revealed. “I don’t want to give too much. There is not a lot of things to say about that. She feels things, you know, by touching people. So she can feel things and change emotions.”

3. Mantis and Drax form a friendship

Although Mantis is new to the group, Klementieff says it doesn’t take long to find a pal in the group.

“They get along,” she said, careful not to reveal any spoilers. “They just – there is a friendship going on and they just click, you know?”

When asked if that may turn into a romantic relationship, the actress remained coy.

4. Mantis will be popping up in other Marvel movies

Mantis debuted in a 1973’s Avengers comic book as a sidekick to a reformed villain called the Swordsman, and she’ll soon return to her roots — the character will appear in Avengers: Infinity War.

Klementieff teased the news on her social media pages, sharing a photo of herself wearing an Infinity War beanie and the cover of Avengers #123, the issue where the team learns the secret backstory of Mantis.

From Coinage: Guardians of the Galaxy Star Karen Gillan and Others Dish on Biggest Splurges

While the actress has mostly worked in France throughout her career, she did appear in Spike Lee’s recent remake of Korean thriller Oldboy.

The sequel to Guardians of the Galaxy as her second role in an American movie? Not bad!

Guardians of the Galaxy Vol. 2 is in theaters now. 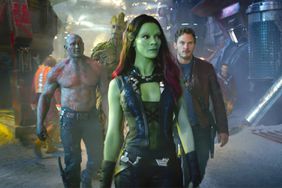