Penny Marshall, who gained fame in the late '70s for her sitcom Laverne & Shirley before transitioning behind the camera to great success, dies at 75

Beloved sitcom and screen actress Penny Marshall, who gained fame in the late ’70s for her sitcom Laverne & Shirley before transitioning behind the camera to great success, has died. She was 75.

Marshall died Monday night at her Hollywood Hills home of complications from diabetes. She had previously been diagnosed with brain and lung cancer in 2009 before going into remission by 2012.

“Our family is heartbroken over the passing of Penny Marshall,” her family says in a statement. “Penny was a girl from the Bronx, who came out West, put a cursive ‘L’ on her sweater and transformed herself into a Hollywood success story. We hope her life continues to inspire others to spend time with family, work hard and make all of their dreams come true.”

Born into an Italian-American family in the Bronx, Carole Penny Marshall briefly attended the University of New Mexico (where she met her first husband, Michael Henry) before joining her older brother Garry in Los Angeles in 1967. She landed her first big-screen role in the 1968 Debbie Reynolds-James Garner comedy How Sweet It Is, which the elder Marshall co-wrote.

But over the next few years, she struggled to find work, often weathering hurtful criticism about her looks. “I wasn’t perky, and it was the years of Sally Field and The Flying Nun,” she once said. When she booked a TV commercial for Head & Shoulders shampoo in 1970, she played the plain Jane opposite Farrah Fawcett’s bubbly blonde.

But Marshall’s luck soon changed when her Pretty Woman director brother, who died in 2016 at 81, cast her in two television series that he produced: First came The Odd Couple, in which she appeared as Jack Klugman’s secretary, Myrna Turner, from 1971-75; then Happy Days in 1975, where she launched the character that would make her a TV icon: Laverne De Fazio.

The wisecracking tomboy and her perky roommate, Shirley Feeney (played by Cindy Williams), were such hits with the audience that the following year, ABC gave them their own show, Laverne & Shirley. The series, which chronicled the adventures of the two Milwaukee brewery workers, is now one of the most beloved sitcoms in TV history. Over its eight-year run, Marshall was nominated for three Golden Globes. And in an indication of things to come, she directed four episodes.

The two costars remained friends after the show ended, and in 2007, TV Land announced they would reunite for a new series, a buddy comedy called Penny and Cindy. Unfortunately, the project never got off the ground.

By the time Marshall made her feature directorial debut with Jumpin’ Jack Flash in 1986, she had more or less retired as an actress. (She had also divorced her second husband, the filmmaker Rob Reiner, with whom she raised Marshall’s daughter, Tracy, from her marriage with Henry.)

Though the films she directed after A League of Their Own – Renaissance Man, The Preacher’s Wife, and Riding in Cars With Boys – failed to match her earlier box office success, Marshall continued to collaborate with her filmmaker friends, producing Ron Howard’s Cinderella Man and Nora Ephron’s Bewitched, both in 2005.

A lifelong sports fan with an extensive collective of sports memorabilia, Marshall spent much of her later years cheering on her beloved L.A. Lakers and New York Yankees. Whether courtside or behind the dugout, she could be seen winning fellow fans over with that infectious Penny Marshall smile, her trademark tinted glasses sitting on the bridge of her nose. 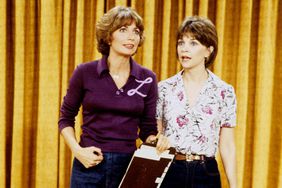 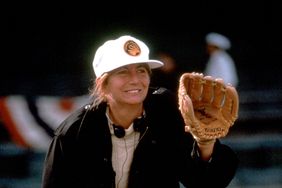