Richard E. Grant Was in 'Absolute Astonishment' After Meeting Idol Barbra Streisand at the Oscars

Richard E. Grant had a magical moment when he finally met Barbra Streisand at the 91st Academy Awards

And just when he thought he couldn’t have had a better Babs experience, the actor got to meet his longtime idol face-to-face.

“Being Oscar nominated was pretty amazing, but meeting with @barbrastreisand and having a proper conversation was an absolute astonishment. 40 carat Gold 🌟🌟🌟🌟🌟🌟🌟🌟🌟🌟🌟🌟🌟,” he wrote on Instagram along with a photo of himself in awe at seeing Streisand onstage.

He later tweeted a blurry selfie of himself and Streisand after the ceremony, writing, “Suitably blurry-eyed selfie with @BarbraStreisand who was EVERYTHING I’d hoped,expected & dreamt she’d be. QUEEN BEE.”

“With @melissamccarthy and @RichardEGrant at the Oscars last night,” Streisand tweeted.

Grant shared his love for Streisand in a tweet in January, in which he revealed that he’d taken a trip to the actress’ home and snapped a pic outside of her residence.

Richard E. Grant Wrote a Fan Letter to Barbra Streisand 47 Years Ago — He Finally Got a Response

“As a lifelong fan of someone you’ll understand what it meant for me to take this snap outside the home of @BarbraStreisand,” he wrote. “Asked Security for permission & he replied ‘It’s a public road, but thanks for asking.’”

Grant also shared he had written her a letter when he was 14 and copied a photo of his letter on the tweet.

Hours after he shared the sweet note, Streisand responded.

“Dear Richard What a wonderful letter you wrote me when u were 14 ! and look at u now! You’re terrific in your latest movie with Melissa,” she wrote, referencing Grant’s most recent film Can You Ever Forgive Me? which also stars McCarthy.

“Congratulations and love Barbra,” she finished.

Grant quickly tweeted back to the actress and thanked her for her kind words.

“I cannot begin to properly express what your generous reply has meant to me! THANK YOU. And most especially for NOT calling Security to have me arrested!!” he wrote, adding six red hearts to the end of his reply.

The 91st Academy Awards were broadcast live from Los Angeles on Sunday. 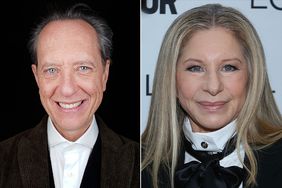 Richard E. Grant Wrote a Fan Letter to Barbra Streisand 47 Years Ago — He Finally Got a Response