Olivia Munn is letting loose in her latest movie.

The actress, 41, stars in Violet, a new film from writer and director Justine Bateman. Munn plays the titular role, a woman who is constantly tormented by a voice in her head telling her she's not enough — until one day, she decides she's had it.

In a newly released trailer for the film that dropped Monday, Munn realizes, "The way I've always been doing things just doesn't work now." For years, she's been listening to a soundtrack of hurtful thoughts about herself (voiced by Justin Theroux), ranging from "You're a freak," to "You smell," and "You're nothing."

The non-stop negativity reduces Munn to tears behind the wheel of her car, but the voice asks her, "There — don't you feel better now?"

She confesses to a friend, "I've been telling myself to do certain things, act a certain way, or else something bad will happen to me," but admits, "I'm scared to do things differently."

However, Munn's character finds the strength to break away, deciding, "I'm not listening to that voice."

The film's official synopsis asks, "What would you do if you weren't afraid? Justine Bateman's intriguing and immersive debut film follows Violet Calder as she realizes that she can no longer ignore the daily barrage of self-criticisms that clouds her life."

Munn's latest role comes after she starred in the Netflix romcom Love, Wedding, Repeat in 2020. Next up, she's set to appear in the TV series Hit Monkey and the drama Aleppo.

Violet premieres in select theaters Oct. 29 and will be available on demand starting Nov. 9. 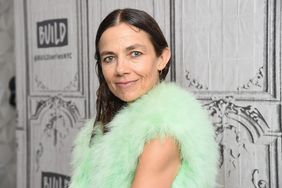 Why Justine Bateman Will Never Get Plastic Surgery: 'Stop Telling Women To Get Their Faces Fixed'