Nicole Kidman is looking back on the intense spotlight placed on her marriage to ex-husband Tom Cruise.

While Kidman, 54, and Cruise, 59, rarely speak out about their 11-year marriage, the actress recently addressed the media frenzy surrounding them when they were together. In an interview with Harper's Bazaar for the publication's latest cover story, Kidman questioned whether she was too candid about their love during their relationship.

"I was young. I think I offered it up?" she said with a laugh, according to the outlet, when asked about the scrutiny she and Cruise faced. "Maybe I've gotten a bit more trepidatious, but I'm always trying to be as open as possible. I just prefer to live in the world that way."

"I'm wary at times, and I've been hurt, but at the same time I much prefer a warm approach rather than a prickly shutdown approach," she continued. "My husband, Keith [Urban], says that when he met me, he said, 'How's your heart?' And I apparently responded, 'Open.'"

Since their breakup, Kidman and Cruise have respected their children's privacy. A source told PEOPLE in July 2018 that Cruise "loves all his children. And each of them has a right to their own story."

When asked about her relationship with her oldest children by the Hollywood Foreign Press Association in November 2018, Kidman said, "I'm very private about all that," as reported by Australia's Who Magazine.

"I have to protect all those relationships. I know 150% that I would give up my life for my children because it's what my purpose is."

In an interview with the New York Times last year, the actress said that she and Cruise were "happily married" while filming the 1999 sexual drama Eyes Wide Shut, in which they played a married couple who deal with infidelity.

Asked if working on the film brought up any "negative feelings" about her relationship with Cruise, Kidman responded, "We would go go-kart racing after those scenes. We'd rent out a place and go racing at 3 in the morning.

"I don't know what else to say. Maybe I don't have the ability to look back and dissect it. Or I'm not willing to."

Kidman currently stars in the Hulu series Nine Perfect Strangers, which is available to stream. 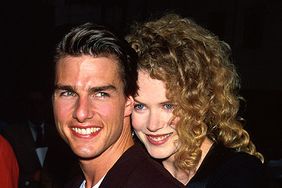