Daryl Hannah and Neil Young appear to have tied the knot in two wedding ceremonies — the first on his yacht in Washington State, the second last week in California.

“I saw a boat down at the end of the dock that I hadn’t recognized from a distance so I thought I’d walk down and see what boat it was,” Fugere says. He serves as captain of NorthWest Sailing Adventures.

Fugere, who was with a friend, spotted Young inside the pilot house of the 101-foot yacht.

A couple of days later, Fugere noticed people aboard Young’s yacht. “[I] thought, ‘Gosh, that looks like a wedding!’ We got out the binoculars and looked and sure enough, it looked like a wedding going on.”

The alleged union marks Young’s third marriage—the former Buffalo Springfield singer was married to first wife, Susan Acevedo, between 1968-1970, and then was married to Pegi Young for 36 years before divorcing her in 2014, the same year he began dating Hannah.

Hannah, 57, has dated high-profile stars like John F. Kennedy Jr. and Jackson Browne in the past, but has never been married before.

“All we could really see was the officiant and the couple because we were some distance away,” Fugere says. “They threw some flower petals and wrapped it up.”

“Shortly after the sunset, then, of course, the blood moon rose,” he says — which was fitting for the “Harvest Moon” singer. “It’s kind of an exciting time.”

Page Six reports that Young and Hannah had a larger ceremony for 100 guests, including Joni Mitchell and Stephen Stills, near San Luis Obispo, California on Aug. 24.

While the couple has yet to confirm the news, their fans and friends congratulated them on social media after rumors swirled the pair had tied the knot.

Young, 72, and Hannah, sparked rumors when she shared a cryptic caption on Instagram Sunday alongside a picture of a white owl overhead.

“Someone’s watching over us…. Love & only love,” Hannah wrote.

“You are the whisperer to all the animals…birds and bees follow you and protect you,” she wrote. “What a beautiful time of love and magic.”

CNN commentator Sally Kohn also hinted at the nuptials with her comment saying she was “so sorry not to be there.”

During an interview in March to promote their movie Paradox, in which Hannah directed Young, the singer gushed he’s “very lucky.”

“We’re very lucky to have found each other. I’m eternally thankful for the opportunity to share my life with her, and she feels the same,” he told Yahoo.

After Hannah and Young became public shortly after Young ended his longtime marriage to Pegi Young, the couple faced criticism from friends, Young said, including his former bandmate David Crosby.

“When we got together, even some of my good friends were negative about it, and I could never understand it,” Young recalled. “[Daryl is] a wonderful human being, and I’m very lucky to know her. That’s all I was thinking.” 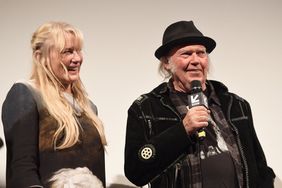 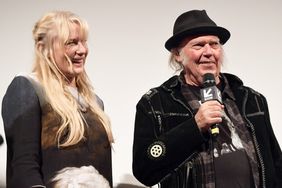