Natalie Portman on Millie Bobby Brown Being Her Lookalike: She's Her 'Own Magical Person'

"I met Millie [Bobby Brown] at the Golden Globes a few months ago. She came up to me and was like, 'People keep telling me I look like the kid version of you!'" Natalie Portman said

Ever since a Twitter user placed a photo of Natalie Portman next to one of Millie Bobby Brown, fans haven’t been able to shake it: the Stranger Things star looks like a Portman clone!

The Annihilation star only fueled the comparisons further while portraying Brown’s beloved character, Eleven, during a recent skit on Saturday Night Live.

Despite the obvious similarities – both have shaved their heads for roles, started in the acting business at a young age and are queens of the sci-fi genre, for starters – Portman doesn’t want anyone living in her shadow.

“I met Millie at the Golden Globes a few months ago. She came up to me and was like, ‘People keep telling me I look like the kid version of you!'” she said during a recent interview with MTV News. “I was so flattered because she’s absolutely adorable and so talented. I’m like, ‘That is very nice, but I think you’re your own magical person.’ But it was fun to give a nod to that on SNL.”

Portman does, however, admit that she understands why fans are seeing double.

“I see that there’s something there, but I also find her much more magical than I see myself,” the Oscar winner, 36, shared. “She’s really wonderful.”

Brown, 14, retweeted the interview with a sweet message to her doppelganger.

“Was a dream come true meeting Natalie! So beautiful and talented,” the actress wrote.

Portman isn’t the only A-list celeb in Brown’s ever-growing fan club. Everyone from Lea Michele and Aaron Paul to Drake and Laverne Cox have lined up to snag selfies with the Stranger Things star.

After Brown revealed her obsession with the Kardashians on The Tonight Show Starring Jimmy Fallon, the family shot the praise right back at her. 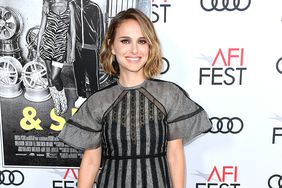