The actress joins forces with WE, an international charity and youth empowerment movement.

Natalie Portman is lending a hand to a great cause.

“I’ve been very interested in girls’ education,” the actress, 35, tells PEOPLE in this week’s issue. “So I did some research and saw that WE – previously known as Free the Children – was really the most efficient and effective school creator.”

She adds, “In 2015, I traveled to Kenya in support of WE’s Power of a Girl project and was able to see the ripple effect that a girl’s education can have. WE has young people in developed countries – primarily in North America – raising money to build schools for their peers in developing countries like Kenya, China, and India. It’s an amazing way to engage young people.”

After traveling to Kenya, Portman became inspired by the power of teamwork.

“WE creates this sustainable system, so it’s not just a new school, but also wells, health clinics and organic gardens that the locals learn how to tend for food,” says the actress. “The goal is to build a village that can be sustained by local people for the rest of its lifeline.”

In celebration of an incredible charity, WE will be hosting a series of 14 stadium-sized events held across Canada, the U.S., and the U.K.

“WE Day brings together world-renowned speakers and award-winning performers with tens of thousands of young people to celebrate their contributions and kick-start another year of change,” the website states. 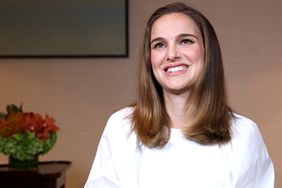 Natalie Portman Opens Up About Visiting Kenyan Girls Striving for an Education: 'It Was One of the Most Inspiring Experiences of My Life'