Mila Kunis was pregnant when she asked Ashton Kutcher to sell his ticket to space, fearing something would happen to him

Mila Kunis isn't sure she should've come down so hard on Ashton Kutcher wanting to go on a civilian space flight — she was just scared!

Kutcher, 43, revealed earlier this month that he previously had a ticket to ride in one of Richard Branson's Virgin Galactic flights, which take civilians to the outer atmospheric layers of Earth. But after his Kunis, 37, said that the voyage wasn't "a smart family decision" (the couple share daughter Wyatt Isabelle, 6, and son Dimitri Portwood, 4), Kutcher sold the ticket back.

Reflecting on it now, Kunis tells PEOPLE she regrets asking him to return the ticket in a moment of panic over their family's future.

For more about Kunis, pick up this week's issue of PEOPLE, on stands Friday.

But her feelings changed once they welcomed daughter Wyatt Isabelle in October 2014 and son Dimitri Portwood in November 2016.

Kunis recalls then asking him to return the ticket. "Being the sweet man that he was," Kunis says, Kutcher decided to please his wife.

"I know I hate it," she says of the decision now. "Also I'm such [Star Trek fan]. The fact that I didn't let him go into space was so selfish of me, but I was a new mom and I was like, 'You can't leave me and the babies.' And so that's where that decision was made out of."

"I want everybody to know I probably would have let him to go to space now, but now it's too late," she adds.

Aside from space, Kunis and Kutcher also have entrepreneurial interests in common. In 2014, Kunis launched her own company, Orchard Farm Productions. She's now venturing into the male-dominated cryptocurrency industry via a newly popularized digital platform called non-fungible tokens (NFTs), which include unique images, videos or music that fans can purchase.

This week, Kunis is releasing an initial 10,420 NFTs that will give the owners access to her new animated digital series Stoner Cats (produced by Orchard Farm).

"It's about a woman named Ms. Stoner [voiced by Jane Fonda] who has all these cats [voiced by Kunis, Kutcher, Chris Rock and Seth MacFarlane]. She has early-onset Alzheimer's, and she gets the wrong prescription," Kunis explains. "Essentially the show is about love and loss. The lowbrow description is it's about a bunch of cats smoking weed and being funny. The idea is to release five 5-minute episodes."

Kunis's NFTs, which can only be bought using the Ethereum cryptocurrency, are graphics that grant the owner access to the first episode of Stoner Cats, with more episodes to come. 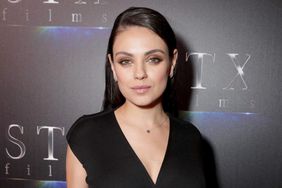