"Should I be breaking a sweat?" McCarthy jokes as Steve Ross instructs the couple to paint swift criss-cross motions across the canvas. "Does that say something about my cardiovascular health?"

Melissa McCarthy and her husband Ben Falcone are channeling their inner artist!

On Wednesday, the pair took a virtual painting class with Bob Ross' son, Steve Ross. The segment was complete with hilarious jokes from the comedian couple.

"Should I be breaking a sweat?" McCarthy jokes as Steve instructs the couple to paint swift criss-cross motions across the canvas. "Does that say something about my cardiovascular health?"

"My arm is killing me! Are we your wimpiest students?" she asks. Steve reassures them that they aren't weak at all, showing off his blisters and other small injuries that he's earned from painting.

As the couple quips about how their paintings aren't turning out quite as elegant as Steve's, McCarthy admits: "Coming to paint with you was rather nerve-wracking."

"Well, every time I have a happy accident, I learn something from that. You start to discover that you almost want to have one, because it teaches you something that you didn't know before," Steve informs his students.

"The times I've bombed is when I've learned the most," McCarthy agrees, before Falcone quips: "I've never bombed. Everything I did was perfect, but I'll let you know if I ever struggle."

In the end, each of them had painted a pink and blue sunset falling over rolling foothills and a shimmery lake. As they added their trees, Steve exclaims: "Yours looks better than mine!"

McCarthy and Falcone are no strangers to riffing off of each other for jokes. In December, the couple posted a satirical audition tape for the film Thor: Love and Thunder.

While Falcone says he is willing to perform a monologue in order to be cast, he also sends a plea directly to the people in charge of the upcoming Marvel movie, including director Taika Waititi and star Chris Hemsworth.

"Taika and Chris and the people at Marvel studio," Falcone says, hilariously pronouncing Marvel like the ice cream brand Carvel. "I have been known to be a song and dance man."

The hilarious video ends with both of them singing their final pleas.

"We're available and a local hire," McCarthy says before Falcone joins in. "We could be love and thunder, or thunder and love." 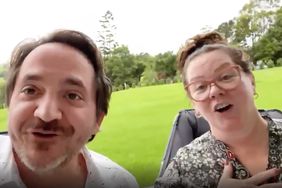