Mel Brooks Says Life After Wife Anne Bancroft's Death 'Is Not Easy': 'She Always Believed in Me'

The legendary comedian is sharing his life stories in the new memoir All About Me!

Since launching his enduring career, Mel Brooks has won an Oscar, four Emmys, three Grammys and three Tonys and has written and directed some of Hollywood's most beloved screen comedies, including The Producers, Blazing Saddles, Young Frankenstein and Spaceballs. But the legendary comedian says what he is most proud of is his marriage to his late wife actress Anne Bancroft.

"She always said, 'Follow your heart. It will be a good adventure. What an adventure life turned out to be!" says Brooks, who at 95 has written a new memoir All About Me! about his childhood in Brooklyn, life in Hollywood and marriage to Bancroft

For more on Mel Brooks, pick up this week's issue of PEOPLE on newsstands Friday.

It was love at first sight for Brooks when he spotted Bancroft rehearsing at the Ziegfeld Theatre in 1961. Three years later the couple wed at City Hall in Lower Manhattan.

"Anne supported me for the first couple of years of our marriage. She always believed in me," says Brooks, who wouldn't enjoy steady financial success until Get Smart in the mid '60s. The two welcomed their son Max in 1972.

"Living this life without her is not easy," says Brooks, about the Bronx-born daughter of Italian immigrants who died in 2005 from uterine cancer at age 73. But he cherishes the memories they made.

"There were a lot of great kisses and great spaghetti," says Brooks. 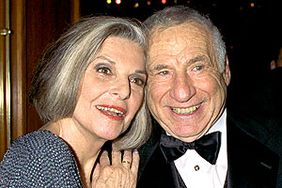